The True Downfall of Resident Evil

8:37 AM on 09.27.2012 (server time)    0
I’ll just say it up front now; when you’re talking about Resident Evil 6 it’s hard to not to mention Resident Evil 4. It’s especially hard for me; as to me, RE4 is a game I judge many action shoot-y type games against. I think it’s a true benchmark game and after playing the RE6 demo it shows that Capcom are having trouble living up to it.

I think everyone knows the problems with RE6. We’ll start with Leon’s section of the demo. Capcom is reported to have wanted to go back to the series’ roots with Leon’s section of the game. Perhaps even harking back to RE2 where intimidating atmosphere and survival horror are the focus of the experience but you don’t really get that, but what you do get is the worst of both RE2’s and RE4’s worlds. You get simple corridor environments with not a lot going on. I know it’s hard to build up the required tense atmosphere within the contexts of a demo but with Leon and Helena’s abilities I doubt it would ever get as tense as it needs to be to remain engaging. During the section where you are locked in one particular corridor, waiting for a door to open and hordes of zombies burst through the windows to attack it’s supposed to be a desperate fight until you can escape, much like on the original Left 4 Dead while waiting for an elevator to come on No Mercy. But since Leon and Helena have such strong melee attacks then you’re never that tense or scared. I’m actually pretty sure Leon could single-handedly deal with all of the zombies with a simple kick to the face then smash their squishy heads with the Diamond Cutter while staggered. Taking the RE4 Leon, then making him more powerful, then putting him into an even more linear game does not make for much fun. 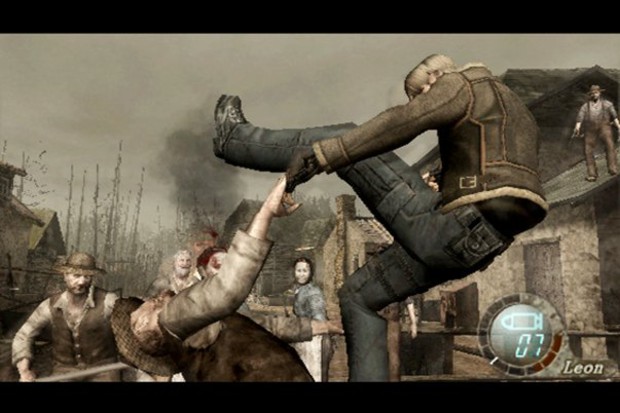 I think Resident Evil 4’s humour is a bigger part of what makes it what it is, and what makes it so special to people, even if they don’t realise it. RE4 has a humour that doesn’t diminish the horror, it compliments it. It’s incredibly Sam Raimi in tone. RE4 jumps from being chased around a claustrophobic and remote village by a chainsaw wielding bastard to being chased around a castle by monks in elaborate gowns with a ball and chain. In another moment you’re running away from the animated statue of a power hungry midget then panicking in the dark, narrow corridors, figuring out how to deal with the chilling and seemingly indestructible Regenerators. RE4 makes you laugh as much as it gets under your skin, and RE5 didn’t do that. RE6 certainly doesn’t.

Some of the same elements are there in RE5 and 6, such as the silly melee finishers but there isn’t the tonal shift. It’s just all mixed or ill thought out, such as in RE5 with the African guys in grass skirts, or Diamond Cutters where the game wants you to take it more seriously. Ultimately, that’s that problem. RE6 wants you to take it seriously if the cut-scenes are anything to go by; all the shouting and drama, but not the unbounded imagination that its predecessor had.

And I do believe that is the problem with the series now. If it was funny; if it had the Raimi style, the creepy, funny, oddly endearing tone to it I think I would still have liked Resident Evil 6, despite its awful controls and nose dive in the quality of level design. I think I would of still held a candle for it if it stayed funny.
Login to vote this up!