Top 10 Actual Reasons to Love the RE6 Demo

4:44 PM on 09.24.2012 (server time)    0
10. All the new movement abilities are goofy as hell. Somewhere around RE4, the series went from being goofy ostensibly by accident to being goofy on purpose. I mean, it's one thing to have a poorly translated English script. It's another thing altogether to have a midget Napoleon for a villain. But one of my favorite things about RE5, despite its more somber narrative tone, was the dumb, fun ways you could break the game with a partner by exploiting the character animations and the gesture menu.

Having Sheva yelling "I need a HERB" over and over while Chris replies with "D'uh I need ammo!" is one of the funnest things you could do with any game this generation, not to mention the weird way Sheva says 'thanks,' throwing rotten eggs at enemies and doing dance moves with the controls. RE6 introduces a host of new moves and animations which seem almost completely superfluous. I have no idea why I would ever actually need to jump backward, in mid air, onto my back so that I could roll around on the ground back and forth, but it's the most hilarious animation I've seen in a game in a long time.

The same can be said for the running baseball slide. I don't know what situation that would actually be useful in, but it's fun as hell to do anyway. Pressing R3 in Jake's bare handed melee mode makes for one of the best dance numbers in a game since Deus Ex Human Revolution. I'm honestly not to hot on the way they changed the way red and green herbs work, but the fact that you heal yourselves by popping a tic tak is great. It doesn't make any sense, but damn is that breath fresh. It's even more hilarious when you get downed, and your partner has to cradle you in their arms and shake a couple tik taks in your mouth. 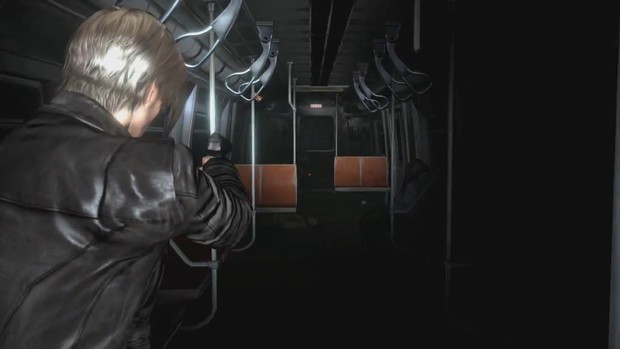 2. There's all sorts of other, little things worth touching upon. Pretty much everything Yuri Lowenthall's character says in Chris's scenario is great. He's like the dumb, comic relief character, except he's not completely obnoxious and shrill. Then there's the fact that he will smooth up try to run your ass over with his APC if you don't watch out for him. Then there's that one zombie in Leon's campaign, that dives on you when you open that door, all RE2 style. If you shoot it up before it can grab you, it just flies up in the air like a party balloon and bounces off of your head. Speaking of party balloons, you can totally shoot out the party balloons in Leon's scenario.

When you're standing at a door that you need your partner to open, you can call out to them, beckoning them over. And if you keep doing it, your character will actually start yelling at them like they're hard of hearing or something. The different HUDs all look pretty awesome, with the exception of Chris and Pierce's. Tying into that is how your character pulls out his or her cell phone when you press select to bring up the settings menu on their phone. It's one of those Dead Space style ways of keeping everything firmly situated within the game world that really adds to the sense of ambiance and atmosphere.

1. It's like Resident Evil 5, except better in almost every way. Sure, taking out item trading was a bitch move on Capcom's part, but if you were into RE5, and let's face it, you should have been, because that game was great, then you have almost every reason to love the RE6 demo.