[NVGR] Images of the new RoboCop, plus thoughts

10:18 AM on 09.17.2012 (server time)    0
For those of you who are not aware, a remake of RoboCop is coming and it�s starring a bunch of people who seem to have decent resumes as actors. Despite the list of good actors, early leaks of the script apparently say it sounds pretty damn awful. My pal Trev described it as similar to what the movie Predators did, where it tried way too hard to convince you that this new movie was cooler and more badass than the original by basically shitting on the original. Apparently the new RoboCop will start out looking like a more modern/sleek version of the original 1980�s look, and after apparently mocking the original look of the character they revise him to look almost entirely different. Well ComingSoon.net posted two on-set pictures of RoboCop�s new look over the weekend, and I have to say it�s certainly� um� different. 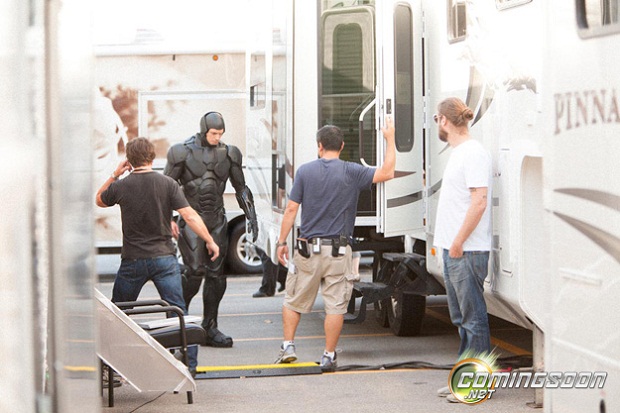 If you�ve followed my blog at all in the past you�ll know I�m a pretty big RoboCop fan and the original movie is pretty high up on my list of favorite movies ever. My personal opinion about remaking RoboCop is that it�s completely unnecessary because the original movie is still plenty relevant and has aged better than anyone expected it to. But, personal preferences and opinions aside, I think this new suit looks pretty awful, not just in an �awful because it doesn�t look like RoboCop� way but awful in a �wow this suit looks cheap and unoriginal� way.

Aside from the thin red visor on the helmet the new suit looks completely different from the original design, if I wasn�t informed ahead of time that it was a RoboCop suit I would have had no idea what it was from. The suit looks like a mix between a Batsuit and one of the nanosuits from Crysis, with a touch of Mighty Morphin Power Rangers: The Movie thrown in too. I�m going to assume (and hope) that this suit is going to get a lot of post-production CG enhancements to make it look better and more metallic, but even then I don�t know if this will make it look any better in my opinion. The material used to make the suit looks too rubbery, and almost reminds me of some of the cheap fake-muscle Halloween costumes you�d see at Wal-Mart. I think the biggest problem with it though is that the suit does nothing to make you believe that this person is a cyborg and not a guy in some knockoff Batsuit. The original outfit had exposed joints, pistons at his heels, and even a heating vent which all went a long way towards making the suit feel more �robotic�.

Despite how unnecessary remaking the movie is, I was actually excited for the idea of more RoboCop after I heard of the castings and the choice of director. But more recent news about the movie has made my enthusiasm for the movie drop drastically.
#ShareonCommunityBlogs
Login to vote this up!