Why Do I Have Too Many Games In My Backlog!?

9:19 PM on 09.06.2012 (server time)    0
[Sidenote: I've only been coming to the C-Blogs for a short time now, and its absolutely incredible. With this being my second "real" blog, I wanted to backtrack a bit and apologize for my very first post. I've seen other people since then get flak for a crappy first post, and I hope that my first blog doesn't deter anyone from anything else I post here. I'm not the greatest writer either, so I hope I don't do too poorly of a job from here on out. Thanks for reading!]

When I was younger, I wasn't able to have all of the new games that I wanted when they came out. My parents never wanted to buy video games for me. "What do you want for Christmas/your birthday?" "Well this game just came out and I'd really like to play it!" "We're not buying you video games!" This was the typical conversation that was had anytime the occasion came about. I couldn't even spend the money I was given on usually more than one game at a time, so it was rare for me to get new games to play. In the time between getting new games, I had more than enough time to finish a game or two, and go back and play several that I had sitting around. My dad had started to give me an allowance of five dollars a week when I was about twelve years old for doing chores around the house. Every week I'd get five dollars and head to a local resale shop and buy some used N64 games that I had never played. Practically each week I had a new game but I was still able to finish it.

Moving forward to when I was seventeen, I got a job at a nearby Gamestop, which I was prepared to have the greatest job in the world. I'm sure anyone reading this knows that is a blatantly untrue and it was horrible. Working there however, I was able to get a discount on games, and therefore was able to purchase more. So I did. I would go through the same cycle still. Take them home, play them, and finish them. Despite being able to purchase more games, it still wasn't anything more than a game or two a week, but they were newer games, better games than cheap $2-3 N64 games like Lode Runner 64 and Clayfighter 63 1/3. 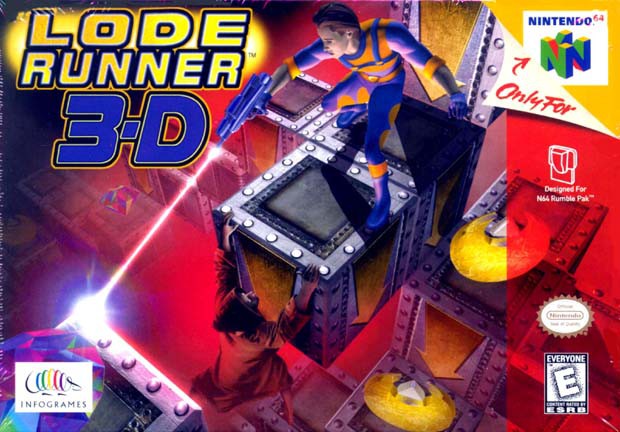 This game was ACTUALLY pretty good.

As my life went on, I've gotten better, higher paying jobs than what I was making at that dreadful Gamestop. I was able to buy different consoles than the original Xbox me and my brother got for Christmas. Since then I've gone through several different consoles, each with a small selection of games. Free time was never an issue for me, but for some reason I just haven't been playing games to completion. Sometimes I would buy a game and not even open the case to play it. I still have a copy of Red Dead Redemption that I haven't touched. I keep picking up new games here and there, whether it be off Steam, used in a store, or brand new. The problem isn't the amount of games that I have, or even the free time I have. I have the same amount of free time I've had most of my life. I just have such a lack of motivation when it comes to picking up the controller and making an attempt to play through something. Several games I own I've completed about 50% but nothing more. When I was younger, there was nothing that could separate me and my game. I've had several Saturday nights when I would be up until 4AM playing nonstop, then sleeping 6 hours only to wake up and play all day again.

I wish I had that motivation again. I still love video games as much as I ever have, but I don't take as much time as I used to to sit down and finish any. The last game I completed in a short amount of time was the two weeks it took for me to finish Batman: Arkham City. There are a few gems like Batman that I have finished, but it used to be almost every game, regardless of quality. Am I the only one that's lost their motivation like this? Should I feel like less of a gamer?

Do any of you have a similar issue? Maybe we can all motivate each other to get gaming some more! With that, I think I'm going to motivate myself right now.
#ShareonCommunityBlogs
Login to vote this up!