10:50 PM on 09.04.2012 (server time)    0
Like last year, I finished my PAX weekend having not played quite as many video games as I'd have liked. However, this is mostly because I spent considerable daylight time hanging out with beautiful and awesome people off the show floor doing things like eating Thai food and not standing line line, so I think it all evens out.

If we spoke at all this weekend, you likely already know that my favorite games of the show were Metal Gear Rising: Revengeance and Super Time Force. So rather than doing Yet Another Video Game Recap List cblog post, I'm going to honor some slightly more esoteric highlights of PAX 2012. 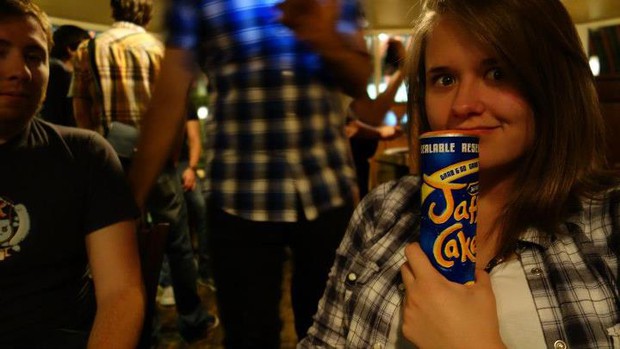 Photo by Ali D
She hit Hamza square in his dumb spiky hair on the first attempt and won a dollar from Mr. Andy Dixon as a result.

Runner-up - There can be only one.

Other things
- During the Hey Ash! panel, a guy got up to ask a question, and Anthony Burch mistook him for Samit Sarkar. He even called this dude Browntown. In front of everybody. And then he realized his mistake.

- Some Destructoid stickers were placed on the hood of a BMW. A group of us then ran in fear inside the hotel, not wanting to be present when the driver returned.

- Speaking of stickers, Niero lifted JJMcCallum up in an elevator to hide one of the stickers on the other side of the elevator's ceiling. Secret vandalism!

- Anthony Carboni seemed genuinely excited to discover that I'm a real person, and not just "a Twitter robot that talks about anime".
#OpinionEditorial
Login to vote this up!