Coming out of hiding with games, and PAX.

8:02 AM on 08.29.2012 (server time)    0
Hi Destructoid. Sorry I don't write back much, I'm so so busy with other things. Okay, that's a god damned lie. To tell you the truth, I've had little incentive to post a community blog on the site. It's unfortunate really, because I am one of those idea guys. Y'know, the one who gives interesting ideas for things, some of which of are pretty dumb? I'm that guy. I get all these ideas in my head and think, �Oh, I should write about them!� But then I don't and then I forget about it or decide not to write about it because the window of opportunity has passed.

It also doesn't help that I run a little games blog thing on the side as a hobby thing, which is mostly about dumb video game related things like video game TV shows you might've seen or a Quake 3 map made to advertise Eminem's �The Marshall Mathers LP.� But since I've been following Dtoid's community for about 2-3 years now, I know the rule of reposting stuff you posted elsewhere is usually frowned upon, so I don't repost it here. Same goes for advertising the blog, I heard that's kind of a community no-no too. (If you actually are curious about the blog and wanna see it and comment about it, you're welcome to see it here.)

With those in mind, I end up with an empty slate on what to post. There's those �Bloggers Wanted� things, maybe I need to keep up with those. I could write a response or two to other blogs that are interesting to talk about. Truth is that I've become lax about everything as of late, just living the internet dream of sitting on my butt all day and browsing web forums and maybe playing video games once in a blue moon.

I have been playing games, at least. Playing the occasional Mann vs. Machine in Team Fortress 2, Strapping it on with Saints Row the Third on my five-year-old PC, even popped in Perfect Dark Zero for the first time because some early pre-release screenshots had been released to the public. And of course, the occasional Rock Band/Guitar Hero solo fun session. Let's talk a bit about those. 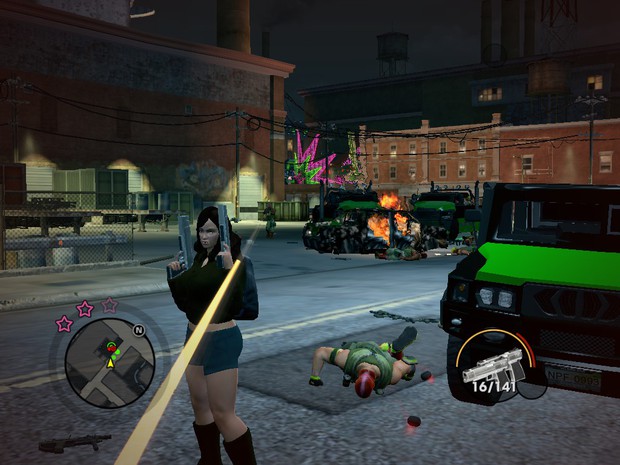 This is what Saints Row the Third looks to me, but when you're having fun, who cares how it looks?

I'm feeling somewhat underwhelmed with Saints Row the Third. Granted, it has some crazy moments, such as an Escort mission where you ride with a tiger in the car, but Steelport doesn't feel as cool as Stilwater did back in SR2. Maybe SR3 is a case where it's a good game, but the next Saints Row coming out in 2013 will be better, much like SR2 was superior to SR1. Maybe we'll get Johnny Gat back in the new one, for real this time.

Perfect Dark Zero is a weird game. It kinda feels like Goldeneye with a pinch of Timesplitters on the side, but without the goofy tongue-in-cheek humor of Timesplitters. It certainly doesn't feel like Perfect Dark so far. Surprisingly there's still a few people playing it online, which surprised me.

Once I finish a game or three, I wanna tackle stuff I bought in the past and haven't had time to finish, like Uncharted 3, Dead Space 2, Halo CE Anniversary, Sonic Generations and even older stuff like GTA: San Andreas and Brothers in Arms. I end up collecting more games than I do playing them, which is bad. Really bad. It's probably gonna get worse as time goes on.

With PAX just a mere few days away, I thought to write this blog about video games. At least, vaguely about video games anyhow. Since I'm going to PAX, I thought I'd do a re-introduction of sorts. For those who may have met me, I'm that shy quiet guy who usually hung with Elsa in Dtoid meetups in past PAX events. That's because she's really the only person at Dtoid I can say that I really �know� outside of staff members. I'm that guy in the back who tends to stand around and listen to conversations and not really contribute to it. It kinda pains me that I'm that way, I guess I must have that silly crippling social anxiety thing. I'd love to change that this year, get to meet some of you folks more casually and do the obligatory �defame the Destructoid poster by saying it sucks despite I'm secretly a fan� like I did in years past. But most importantly, to meet with gamers and play games. Because that's what PAX is all about, isn't it? Play games, meet people, have long-lasting memories until the next PAX, and repeat after that.

Well, that's all I got to say, really. This site is pretty cool in spite of irrational hate, and I think you guys are cool dudes. Let's hang out some time, have some fun.
#ShareonCommunityBlogs
Login to vote this up!