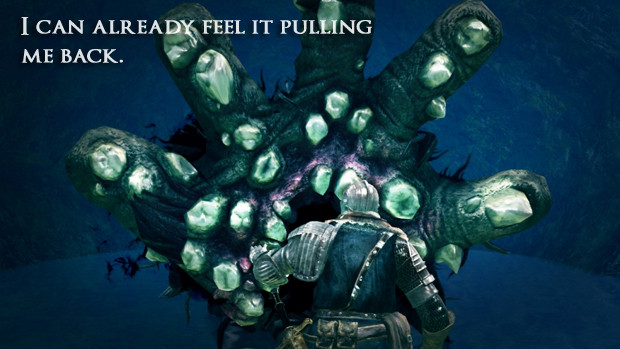 But is it one worth the cost? For the Dark Souls vet, is the new content and better graphics (predicated on the idea that you WILL get the mod) worth investing in? Do you mind risking spoilers and holding off to the apparent Fall/Christmas release of the DLC for consoles, or is that a major concern for you?

If that is a serious question weighting on your mind, just go ahead and buy it. I know as a person who has been obsessed with Dark Souls for almost a year now, I found it worth the price of entry – and I even had to pony up for a controller to play it. If you have a passion for Dark Souls your faith and dollars will be well rewarded with Prepare to Die.

If you are a newcomer or someone who has been Souls-curious for awhile but never quite made the jump, this is the best version of Dark Souls available hands down. All things being equal, this is the version to get.

And you should play this game. It's a masterpiece. Even with the frustrations of its network problems, with its broken arena, useless Gravelords, and sometimes impenetrable mechanics, this is still a deeply beautiful game that is unlike anything else on the market (well, aside from Demon Souls.)

Maybe I'm gushing a little, but I truly believe this is one of the best games ever made and the PC version is (so-far) the greatest expression of it. In a decades time I think people will talk about Dark Souls and game design the same way they talk about Zelda and Deus Ex. Legendarily progressive and insightful games that set the standard for those to follow. Dark Souls might never spawn direct imitators like those titles have, but it should certainly inform developers of the possibility and power of real player freedom, choice, repercussions, and meaningful online experiences in a game.

Dark Souls isn't always the smoothest or most accessible game, but the reward for putting up with its quirks and foibles is something no gamer should miss.
Login to vote this up!