Lights, Camera, Party struggles to break into a stalemate genre

9:37 AM on 08.28.2012 (server time)    0
From the inception of the Wiimote through the latest Kinect developments and even the in-between PlayStation Move, consoles have been plagued by shovelware � games designed to take advantage of a new and in many ways gimmicky feature. Red flags include low production value, poor or no voice acting, short development cycles, a collection of mini-games and release day price-points that cause you to raise an eyebrow. Little kids love them � they aren�t seeking any kind of artistic stimulation. While the game claims to target the party scene for any age group, it�ll never actually catch hold of the college crowd hanging out on a Saturday night. Mario Party remains the only franchise to ever overcome the party game stigma with Nintendo�s watchful eye separating it from the piles of shovelware.

Lights, Party, Camera from Frima Studio is looking to change that. Taking full advantage of the PlayStation Move controller, LCP is offering a set of games with a tad more polish that will hopefully gain it a following from those who can�t enjoy Mario Party. 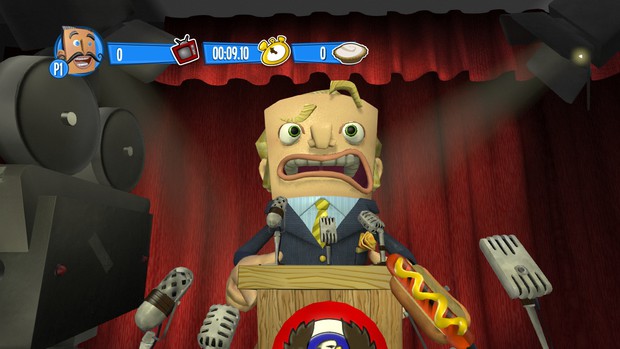 In the face of a market that hasn�t fully embraced the Move controller, LCP gets off on the right foot by using a pass-and-play method instead of requiring each player to wield a Move controller. Not only does this facilitate up to eight players, but it also means that PS3 owners don�t have to invest in multiple controllers to make the party happen, opening up a wider audience. This is supplemented by the $30 price point � a tad higher than your average non-AAA collection of mini games, but still low enough to constitute a gamble.

This is where the accessibility ends. A party game is at its best when anyone can pick it up and play off the bat, and LCP isn�t always fitting this bill. Don�t even consider the hard difficulty for first-time players (and often even for veterans). Additionally, instructions for each game fly across the screen at breakneck speeds, sometimes not even covering the entire premise (there�s still one game involving dodging cream pies that I don�t quite grasp). This can be frustrating for newcomers who just want to play. While the Move functionality is very cool, it means more complex games as opposed to mashing a button as many party gamers are used to.

Some games require a bit of finesse, or at least give the impression they do. The Move controller is extremely intuitive, and so it reflects that no person can really hold themselves completely still, especially with a controller in hand. This can make intricate tasks seems abysmally difficult, especially on a 3D plane, which is still a fresh way of playing for many people. It�s hard to deem this as inherently bad, since this is the direction that gaming seems to be headed, but for the time and place, it might be a little much.

The story mode offers next-to-nothing and doesn�t even justify the time that may have gone into it. As many players as desired can participate to build a house for the Funzini family as they partake in a game show, Lights, Camera, Party! The characters sit in a couple different places that have no bearing on the festivities and then segue to strictly single-player mini games, many of which you�ll play multiple times, as there aren�t really that many. Whichever player wins the round gets a portion of the house built in their character�s fashion. The whole process takes about half an hour. With no script and paltry humor, time would have been better spent elsewhere.

Of course, it�s a party game, and so we�re much more interested in the party modes. LCP offers three, all of which balance a little bit of luck with a little bit of skill, meaning any player can win - a smart move to give experts confidence and newcomers the drive to become a dark horse. The mini games remain one player at a time, which eliminates some competition, but also helps to eliminate stratification of guests and the party host who has already played the game a thousand times.

Overall, LCP rises above the shovelware stigma, but is still trying to bust into a generally monopolized genre. Without popular IP, it�s a lost cause on gamers who don�t make a habit of browsing the PlayStation Store, and this is only kind of a bad thing.

Bottom Line: 7
#ShareonCommunityBlogs
Login to vote this up!