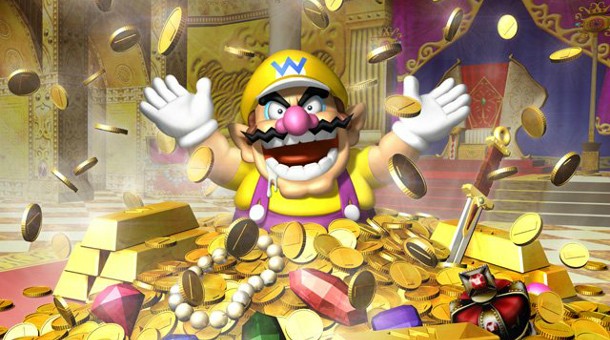 It's Friday! That means...something! Are you ready to Friday? Why or why not? I want a 250-word paper by noon Saturday on whether or not you were ready to Friday, with well-explained reasons. If you skip this assignment, you will be dropped a whole grade. Those whom already have an "F" will be demoted to janitors for a day.

Now that that's out of the way, it's time for all the handheld biz. In 2 days New Super Mario Bros. 2 will be coming out, along with a new 3DS model: The XL. NSMB2 looks alright, but it's the first one in awhile that I won't be getting at launch. It just isn't doing it for me. I was almost sold when they revealed "coin-rush mode," but it turns out that there aren't online leaderboards. That could have been a brilliant way to keep people playing and buying DLC, and it's such a seemingly simple thing.
UGH.
Oh; almost forgot: With Nintendo finally entering the digital space in a more modern manner, it's going to be offering this game from the eShop on launch day. Cool, maybe, but it's the same price as retail so...it's all about convenience (which is actually important) and them shiny Club Nintendo coins. You do get double the coins, y'now. Oh, but that cool gold nunchuck is already sold out. So...
I'm interested to see how this first big digital release goes. My sympathies if you aren't in the U.S., as Nintendo, as well as many others, seems to enjoy charging as much as they want in other regions.
But hey: if NSMB2 is closer to its DS predecessor than its big Wii brother, then it's not a huge loss anyway.


FOR MARIO KART 7 PLAYERS: When playing Mario Kart 7 we will be using community feature to play together. To join us, simply enter the Dtoid community code (For races: 43-8816-8269-4512) and wait in the group. Please try to be patient and wait for other players, as once a Grand Prix starts players cannot join until the entire tournament is finished. Each group can only have up to eight players, but there can be an infinite amount of groups playing at one time in each community. Now, before you try to join a group check how many groups are playing already. If you see one or groups playing, but when you join everything is empty, then the match has already begun. Try leaving and then joining again in a few minutes. An easier way to do all this is to exchange friend codes and spam the "Join Game" feature on your fiend list.

For Kid Icarus players, just get on each others' friend lists. It's easy.