7:33 PM on 08.14.2012 (server time)    0
A year and a half has gone buy since I purchased my 3DS at launch. After all this time playing all my ambassador games, I thought it'd be a good idea to Finally get eshop points. After wasting them already on the Mario Land Trilogy, I pondered on what to get next and frankly, not a lot of the games peaked my interest aside from DK94' which I already own. Then it hit me - Mole Mania![b]

Never hearing of or playing the game ever, I thought that it'd be worth the purchase. My eyes were glued to the screen as I cleared each world very quickly, awaiting more puzzle based challenging goodness. The game was worked on by Shigeru Miyamoto for the Gameboy. It was about a Mole named Muddy Mole who has to traverse across elaborate puzzle worlds to rescue his wife and kids from an evil farmer named Jinbe. Although there are very few cut scenes in the game, I find them quite funny, sometimes laughing out loud, from how the main villain kidnaps the family to how Muddy reunites with one of his kids. 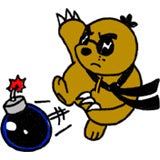 the game is so much fun to play, pretty much you have to grab objects like a big black ball and somehow roll them over towards the gate to the next screen. You have to use your digging skills to solve each puzzle. It sounds easy, but it really isn't. Your very much restricted in how you move any object in the game. If an object's against the wall, you can't push from the other side. enemies can be a hindrance because of how they are placed in the game, so it's important to take out as many enemies as possible. Also different objects can only be moved in certain ways, you can push weights but you cant pull them, same applies to pipes, which can change the direction of where the black ball is moving. Something that screws me over the most is moving barrels, if put into holes, they can block your path underground sometimes separating me and where I need to go. You can also roll cabbages and place them into holes, rolling 5 cabbages into holes can give you a heart piece, which I feel is kind of pointless because there are healing areas in the game that can fully heal you. Regardless rolling in all the cabbages is required for getting 100 points.

One thing I really appreciate in the game is how fast you learn the controls, putting many video game tutorials to shame. You just look at all the quick explanations of the basic controls in sign posts that are all put in the first area of the game. Another thing I love is the catchy 8 bit tunes that go along with the game. It never gets too repetitive or boring.That's really all there is to say about the game. it's pretty damn good and worth your time and money. It's a virtual console game that should be getting a lot more attention. If anything It made me want Muddy Mole to be in the next Smash Bros. or get a sequel. Mole Mania gets a definite thumbs up from me.