Here it is - My Top 10 Favorite Sonic Characters

9:49 PM on 07.28.2012 (server time)    0
Oh yes, It just happened! I feel like I'm playing with fire with this list. Sonic characters whether you like them or not are one of the many factors as to why sonic fell from grace. many gamers thought they were either annoying, useless, or downright boring to play as. Many of which do nothing but stand in the background with there annoying voices looking as though there all high and mighty and important and shit. I'm gonna name some characters that I actually do like though, many of the choices and placements you'll find odd. Dive on in on a somewhat controversial list...

Lower those pitch forks and torches, like you I used to hate this character with a burning passion and just looking at him made me sick debuting in the godawful Sonic 06 game. That annoying voice, how he felt like a pussified shadow clone, being in Sonic 06. But why do I like him now. Sonic Generations is the answer. First things first, He has a new Voice actor that makes him sound better. the other thing is his boss battle, of all his rival battles, he has the funnest one, he flies, throws junkyard shit at you and when you beat him up he gets run over by that giant ball of garbage (sorry for the spoiler). Of course that doesnt fully forgive him for still feeling useless but its a good start. 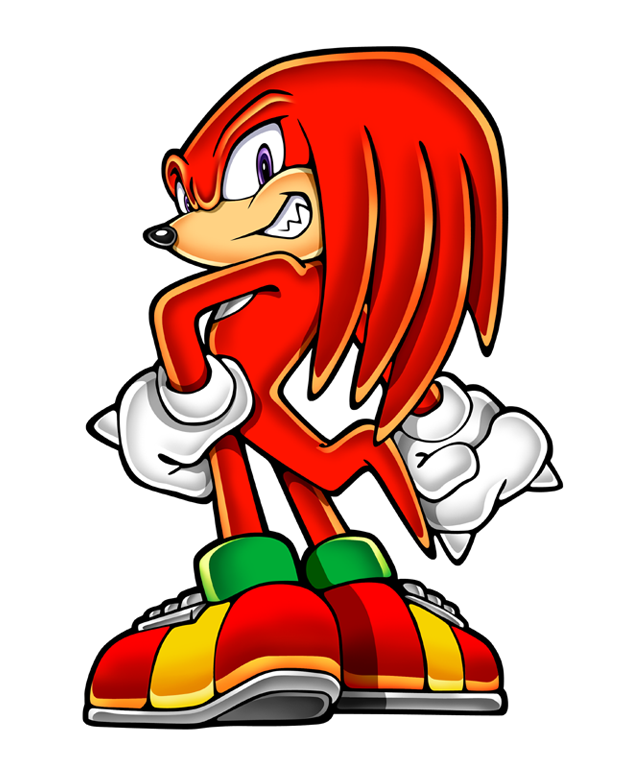 Heres a character that alot of people seem to like, a treasure hunting, powerful, friend/rival to sonic, with an important role to boot. debuting in Sonic The Hedgehog 3, Knuckles is the guardian of the master emerald and is a very fun ally/rival to sonic being the polar opposite of him in every single way. Now I know what your thinking, why the hells he very low on the list, for reasons that's why. I feel as though such a promising character like him is also filled with flaws, first off, Why is he such a dumbass, I can understand being tricked by eggman being an honest mistake but on a multiple amount of times, good lord, just look at eggmans face, he just screams untrusting. another thing is his 3D outings, Treasure hunting sounds like fun, but it is presented in a very boring and repetitive manner it makes me groan every time I enter his levels, why is he trusted to be the guardian of the master emerald anyway? Despite the flaws he was my first favorite sonic character and still holds a special place in the sonic verse, also Knuckles wore an Indiana Jones hat at one point so that officially makes him a badass. ONWARD TO THE NEXT CONTROVERSIAL CHARACTER PLACEMENT!

Yes! Vector The Crocodile/Alligator/Whatever Fuck You! This character is Filled with pure concentrated genius, an alligator wearing headphones, chain necklace and a highly annoying voice. He debuted in the 32X game, Knuckles Chaotix. He is a leader of a detective agency that doesn't do jack squat and is money obsessed. Why do I like him, There is no good reason, there's something beautifully trollish about this character, Come to think of it, does Sonic even know this guy?

Amy Rose comes in 7th place, Now for the reason as to why I chose her. I like Amy because SHE GETS SHIT DONE! Debuting in Sonic CD, Amy is awesome because everywhere she goes she carries a giant hammer that she uses to kill people with, we need to see more of that hammer. In my mind she acts as an anti princess peach, Where as Mario travels so many miles to rescue Princess Peach, Amy runs after Sonic as Sonic runs in fear. in Sonic X she acts as a fucking war monger. It's reasons like these that she makes it onto my list.

This one I have no fear of putting on my list. Perfect Chaos A.K.A the greatest one time villain for the sonicverse. Chaos is a monstrous water snake that destroys shit...THAT'S IT! Chaos made it's debut in Sonic Adventure. It also provides back story to the origins of the Chaos Emeralds and the Master Emerald. Eggman being Eggman breaks this beast free from imprisonment and uses its power to take over the world and crush Sonic. Perfect Chaos - keeping it short and sweet.

Tails is little helper with a heart of gold, Yet the little bastard keeps stealing dem air bubbles! Debuting in Sonic 2, Tails is like Sonic, except not only is he as fast but he can fly really fast as well, which pretty much makes him more powerful than Sonic I guess. He's a Techno genius at that too. Sonic and Tails together are like the Batman and Robin of video games,They work really well together and their relationship is still very uh, you know what I mean........wink.

HHHNNNNNNNNNNNGGHHH! This guy right here is a buffet of manliness! alright, alright I remember as a kid I used to like the character of shadow because playing as him was the very first time I played a villainous role in a video game. then by middle school I acted all cynical like and said I hated him, now I like him more than ever just because of how much of a douchebag he is. I already admitted that his self entitled game is my greatest guilty pleasure of a game. all I'm saying is that a gun toting hedgehog that rides a motorcycle and mildly swears should definitely warrant a sequel (yes, I'm that much of a horrible person).

AH HA! I GOT YOU! You thought he was #1, you thought wrong. I truly do believe 2 more characters deserve a higher ranking than him, but goddammit, what can I say, Sonic's awesome! He's one of the few video game characters that challenged Mario and touched his level of fun gaming quality. He's got teh attitude, he's got teh speed. He changed the world of gaming. His classic games continue to be played to this day and his recent outings are jumping back to good old quality fun. My reasons for liking Sonic are pretty much the reason why everyone else does so moving on...

Doctor Eggman/Robotnik/Whatever Fuck You! If he's #2 on sonic characters, he's probably on my top 5 villains list of all time.I can't even describe why Eggman is awesome he just is. I'll say he probably aged the best as a sonic character. Unlike most villains, He works on his own by capturing tiny animals and robotizing them and serves as a the boss of the stage in every goddamn level. I'll say the greatest example of him as a villain is near the ending of Sonic Generations, I respected him on a whole new level afterwards. What can I say, Eggmans a boss! On to My #1 Sonic Character...

Metal Sonic takes #1...your not surprised are you? Metal is just a really damn great sonic character with so much personality (ironic considering he's a robot) But if it weren't for Sonic 4 Episode 2 and Metal, He probably wouldn't take my #1 spot, So what made him become my favorite character just because of 1 game. One thing that makes a great villain in my mind: Persistence. Eggman has it, Bowser has it, Dr wily, Ganondorf, Liquid snake, Pac Man ghosts, they all share one thing in common and it's them constantly giving there all trying to take you out even after defeat and metal sonic certainly shows it in the game. THAT is why I love Metal Sonic as a villain, and as my all time favorite sonic character. Well. I hope you have a few remaining brain cells left for enduring this list. GET OUT!

P.S yes I know Blaze The Cat is missing, good solid sonic character, apparently I like trolls over good actual characters
Login to vote this up!