Five years ago today I joined Destructoid and it changed my life.

3:45 PM on 07.23.2012 (server time)    0
I can honestly tell you that the boredom I suffered back then steered me into one of the greatest decisions I would ever make in my life and would put me in the position I�m currently in.

Five years ago to this very day I joined Destructoid. I didn�t know a single person, I didn�t even really know what the website was �about� other than sarcastic people discussing video games. I was working an incredibly boring job in Charlotte, NC, I had a LOT of free time during work, and I had seen the site through Digg.com (lol, remember that? Of course not, no one does.) and Dtoid�s overall attitude towards video games was spot-on. That attitude of course being: vidja games is cereal bizness.

I hopped into the community blogs and found this culture of gamers who were just like�me! People who loved video games, appreciated the history, and were able to express viewpoints and opinions in a funny, entertaining way. It was like that old tale of the lonely minotaur who one day discovered other minotaurs like him playing in a meadow. So I wrote my first blog post, it was about how big budgets could kill the Guitar Hero franchise (Hey, five years later�called it!). I had people comment on it and engage in conversation about what I had written! I had actually found a place where I could talk video games with people that I was on the same level with!

I noticed one guy who I thought wrote funny stuff that went by the name -D- on the site. So, what do I do? What anyone would do. I creepy stalkerly sent him a private message saying, �Hey man, you seem cool, here�s my IM name, chat me maybe?� And what did -D- do in response? He wrote me back!

We ended up talking a lot over the next few weeks, which would become the next few months, and what used to be boredom at work was now filled with me writing blogs on Destructoid with people that I had become good friends with. OVER THE INTERNET. Kryptinite, Hoygeit, Snaileb, Tazar, bhive01, BahamutZero, BronxBomber, itemforty, CharlieSuh, BigPopaGamer, PheonixBlood, Coonskin, electro lemon, Cowzilla, DVDDesign, DJ Duffy, HarassmentPanda, RockVillian, BlindsideDork, P0werGlove - these were their names to me. It�s hard to tell your friends in the real world that a guy named Snaileb and you had a funny conversation that day about Dynasty Warriors.

Anyone that knows anything about the Internet knows that all relationships are eventually escalated to the point where you have to actually �meet.� Face to face. Man on man. Physical. Human. Interaction. In 2008 an opportunity would arise for such a thing: PAX �08. To this day, that was one of the most fun times of my entire life: running around Seattle for four days with friends I had made over the last year doing nothing but playing video games and drinking. Ah, would that this hoodie were a time hoodie. 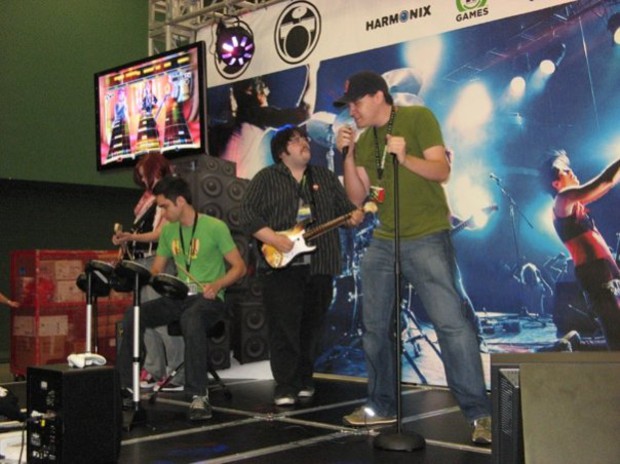 Like I said, that�s what this story is all about though: connecting with people who have the same passions as you and doing cool shit with them.

Fast-forward to now, I actually live in Los Angeles and am a Producer for g-NET. I make trailers like this and this. I�m roommates with -D- (Dennis). It�s still surreal.

I even get to go to E3 every year! In fact, this year I ran into Jim Sterling and said, �Jim! It�s me.� He looked at me for a second. �Butmac!� I said. �Butmac!� he laughed as he gave me a tremendous bear hug.

I feel like I write this as a graduated member of the class of Destructoid 20XX. Work hard at what you�re passionate about, surround yourself with people that you enjoy, and don�t stop playing video games.