Resident Evil 6 and the Delusion of Horror.

12:32 PM on 07.07.2012 (server time)    0
Before I get into what I actually want to talk about, I'd like to give a brief background on my history with the Resident Evil series. I've been playing Resident Evil since the very first game on the PlayStation, all the way back in 1996. I've been with the series so long that I can actually say I eagerly awaited and bought Resident Evil: Directors Cut just so I could get my hands on the Resident Evil 2 demo disk. Another important note to bring up is while I adore the classic Resident Evil games, I also love Resident Evil 4. I have no real preference of one gameplay style over the other, I appreciate and enjoy both for different reasons, and both are represented in my top 10 favorite games of all time with Resident Evil 2 and Resident Evil 4. The only reason I'm bringing this all up is to pre-counter the argument that I’m biased in any way shape or form towards the classic games, or that I just like to "hate" on anything new. Quite the opposite, I tend to always welcome change. Resident Evil is a series I’ve held dearly for many, many years, and I’ve always frothed at the mouth with excitement each time a new installment is announced, it never even occurred to me that there was any other reaction I could have. 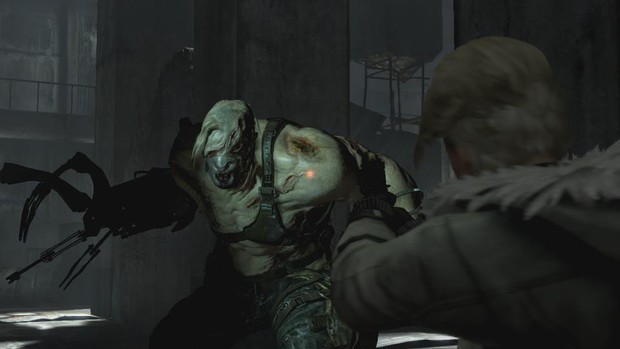 I fully acknowledge that I have not yet been able to play Resident Evil 6 myself yet, but I can’t help but feel like it’s so distant from anything resembling Resident Evil that I have a hard time even recognizing it as a Resident Evil game. Things like the bone crushing linearity ruin any real potential this game had at a creepy atmosphere, not to mention the notion that Leon’s section is horror is completely disingenuous. Having monsters, gore, and a dark room here and there should not automatically classify your game as such. Although Capcom and many other publishers/developers seem to think so, and it’s a lot like what I mentioned earlier about most horror movies being shit for not understanding the genre they claim to be a part of, videogames are heading down that same path. This whole notion of blending horror and action is a total farce because “action” is all about ultimate empowerment, while “horror” is all about disempowerment. From what I can tell of Resident Evil 6, the horror is just being overpowered by the action.

On a final note, I feel it’s important to address people in the gaming community that are insisting that Resident Evil fans need to just accept the fact that it is no longer survival horror. While it’s true that Resident Evil has been heading down this path for a while now, and Capcom have made their intentions clear. The notion that we have to “get over it” is a load of shit. If you are reading this blog, chances are you are a person that is very passionate about videogames, and chances are you also have a specific videogame series that helped define you as a gamer. Now imagine if that series you loved was turned into something that completely goes against what you liked about that series in the first place. Can you imagine what the reaction would be if Valve finally showed off the next Half-Life and it was just another Call of duty clone? The internet would turn into a fucking sea of rage, and no one would be saying “get over it”. Just because you do not have the same affinity for a game or series as others does not make their concerns any less valid.

For me, if I were to say what series helped define me as a gamer, that series would be Resident Evil. I grew up with it and it was pivotal in what I’ve come to like in videogames. It was the series that created survival horror, and throughout much of its history addressed many different kinds of fears people have. It could be continuing that tradition, but when horror is not even the central focus I have my doubts. Now it is just becoming another 3rd person shooter, and most of what fans originally loved about Resident Evil is long gone. I will of course withhold my final judgement of Resident Evil 6 until after I play it, but even if it is a good game, it is still the departure nobody asked for.


If you’ve managed to make it to the end of this blog I thank you, and hope it was interesting for you. While you ponder all of what you just read, may I offer The Ultimate Bio Weapon Melody as your background soundtrack, it’s an arrangement of fully orchestrated music from Resident Evil 2. No real reason for this, I just love it is all :)
Login to vote this up!