I'm watching Buffy and Jim Sterling is a right bastard 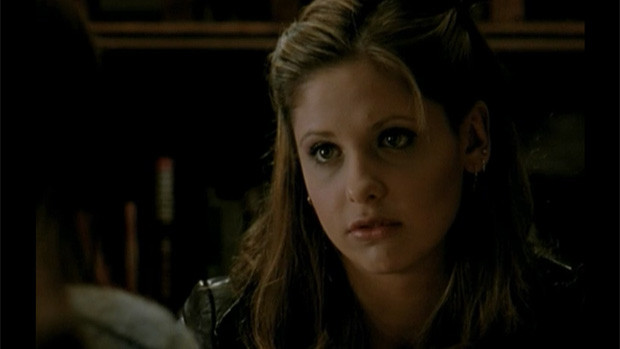 Last week, I appeared on an episode of Podtoid. At some point in the proceedings, Jim Sterling made some comment regarding Buffy the Vampire Slayer and was shocked when I professed to have no particular interest in the series, as we are of course required to like all of the same things. And because I'm the sort of person who'll give a try to just about anything that isn't commonly distributed via injection or inhalation, I agreed that I would give it a shot.

Well, I'm seven episodes in and Jim's a jerk for provoking me into it now that I've realized what I'm in for. There's seven seasons of this? Am I obligated to watch the spin-off? Oh, the things I do to satisfy that luscious vessel of man-gravy.

So far, there have been a few genuinely entertaining moments, usually short bursts of clever dialogue, but it also feels like it's faltering a little bit in its balance between camp and cool and it's not quite working. Then again, I've been led to understand that the Joss Whedon requires a little time to get cooking. Seven seasons and millions of fans suggests that it finds a groove eventually and I expect I'll be rolling right along with the fun halfway through season two. In the meantime, it's not terribly exciting.

Any predictions on when in the series this transitions for me from feeling a little bit like a chore to feeling like an imperative?
#ShareonCommunityBlogs
Login to vote this up!