I Suck At Fighting Games: Soul Calibur V is AWESOME

I'm just gonna get straight to the point here. I love this game. It's my favorite fighting game right now. It might be the best game I've ever played online. Not just for fighters. It's a strong contender of being the best online game I've played in ANY genre. 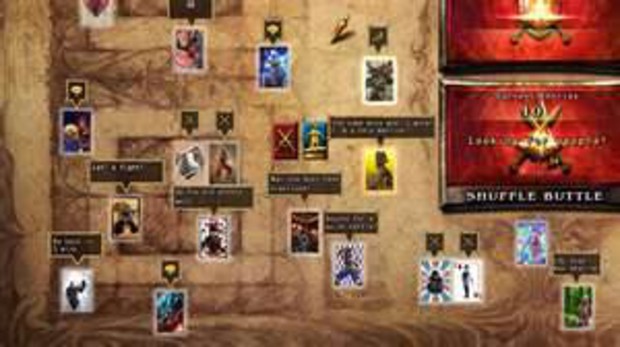 Global Colosseo is a lot simpler than it looks, I promise.

All these features, plus the ability to mark certain players as rivals (which allows you to consistently compare statistics with them whenever you want), plus a pretty good replay feature are why I'm saying that Soul Calibur V's online mode is incredible. Every fighting game should strive to have online features like this.

On a more personal level, I actually felt like I stood a fighting chance against people in this game. In Skullgirls I just lose and lose and lose forever. I know it takes a long time to get good at a new fighting game, but I don't ever feel like I'm improving and it gets discouraging.

The opposite is true for Soul Calibur V. Maybe it's because of my past experience with the series, but I feel confident in every match I play. I know my character well, and there isn't really anybody on the roster who I feel like I'm ALWAYS going to lose against. And I'm actually winning matches consistently as opposed to just losing all the time! Winning once in a while and having a replay feature to analyze why I lost makes me feel more confident in my game. I feel like I could actually get good at Soul Calibur V, even though I'm still mediocre right now.

There are some things I don't love about it though. Soul Calibur has always had a fairly good storyline that gave every character good reasons to beat up everyone else. I always appreciated how they gave each character a story that spanned multiple games with cutscenes and had some kind of fun, replayable single-player modes.

So where the hell is that stuff? Story mode is lazily produced and only follows two characters ever. The timeskip between 4 and 5 got rid of several characters and brought in new ones...but they didn't even give them a back story besides in the art book? Come on!

I know the competitive multiplayer is the crux of any fighting game, and Soul Calibur V nails that. But the game always had a well-thought out story and cutscenes for every character and now it's just gone. The single player modes are just a bummer.

I'll wrap this up before it gets as long as the last blog.

What I Liked:
-Absolutely fantastic online experience. Flawless netcode, great replay feature, marking rivals, and a multitude of modes. I love this.

-Easy to pick up and play. Since I'm trying to get good at fighting games, I appreciate this. I feel like I can actually play and win as opposed to just getting stomped into the dust all the time.

-Pretty good training mode. It doesn't fully teach you how to play the game and know all of its systems, but it does teach you a few strong moves per character and has a lot of options for your training dummy.

What I Didn't Like:
-Less, and WORSE single player modes than previous games in the franchise. I know fighting games aren't really about single player stuff, but it's jarring when you got it RIGHT before and got it so, so WRONG this time. I'd like a story for all these new characters. I don't think that's too much to ask for.

-Training mode could do a better job of explaining systems. I had to look up Guard Impact and Just Guard online to find out how to use them. Don't do that, game. Teach me that stuff in the game. I wanna get good here, help me out!

My experience with Soul Calibur V has kind of changed my perspective on the genre in general. I like this game so much that I think I'd rather be playing 3D games than 2D games. Virtua Fighter 5: Final Showdown came out recently, and I'd like to play that. If I hadn't played Soul Calibur V before and remember that I used to like 3D fighting games (and still do!), I would have completely ignored it.

So my next blog will be about either Virtua Fighter 5 or Persona 4: Arena. I've been looking forward to the latter for a while, but the former is already here and I'm really interested in it. Might be a while because I have no Xbox right now, but I'll get on it as soon as possible.

Play Soul Calibur V! It's great.
#ShareonCommunityBlogs
Login to vote this up!