I Boiled A Broken Xbox 360 Game

2:38 PM on 06.17.2012 (server time)    0
Yup, boiled. I gave that disc a nice hot soak in the frying pan in my kitchen. It was broken, you see. We all need a hot relaxing bath to restore and refresh our tired bodies sometimes – even video games. Well, that’s not entirely why I did it. So what series of events could possibly lead me to carry out such a maniacal endeavour? I’m glad you asked! 'Cause, y'know, I've gone and written a blog post all about it.

The victim was Lost Odyssey, a fantastic 360 exclusive that I’ve recently got round to playing. It’s a rather large RPG held across four discs, and a few weeks ago I had reached the finale that is disc 4. Over 40 hours of gameplay later and I was prompted to insert disc. I obeyed, only to be greeted with an error. I was devastated! Now I’d never see the ending, or get round to exploring and completing the side-quests as I had planned. Sure I could buy another copy of the game, but I couldn’t simply wait for a new game to be delivered. I’m a gamer, so I want everything now.

Because I’d been playing the game for so long, it meant the return period had expired too. I couldn’t really complain because it was a steal on eBay, especially considering the amount of fun I’d already had. Being locked out of the final section of an amazing game is maddening, however. I had to find a way. 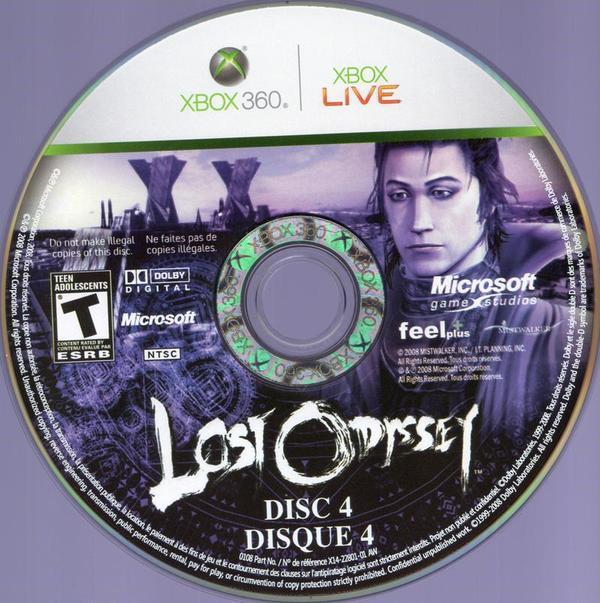 Guys, I know we all love Jansen, but sometimes I've just got to burn him. Its for his own good.

Many of you may have heard of the toothpaste method – you can fix scratched discs by rubbing fluoride toothpaste all over their shiny underside, which fills in the cracks and evens out the surface, so that the laser can once again read it correctly. I’d never heard of such a thing before myself – mainly because I take good care of my games my babies. The odd thing about all this was that the disc looked fine. There were one or two light scratches, but nothing more than you’d expect from even a fully-functioning game, and I wasn’t sure if there was really anything there that a bathroom substance could fill in. Having read about the toothpaste fix across the Internet and how it has such a high success rate of fixing games though, I decided to give it a go all the same. The disc was worthless at this point, so what did I have to lose?

About four or five squeezes of toothpaste, actually. Yeah, it didn’t work, as I suspected. After all, the disc didn’t really have any visible scratches to fill in. I used a disc cleaner on my Xbox too. It already played other games fine, but I was desperate. That didn’t help either, and I was puzzled. What sick twist of fate was this? What could possibly be preventing this game from working? That’s when I decided to ask Google. Whenever I have a question, no matter how obscure or trivial, Google is there, like some digital agony aunt/wise man that I turn to. It seemed unlikely at the time that many would be experiencing the exact same problem with the exact same disc of the exact same game, but again: desperate times.

To my surprise, the issue was common. Dozens of forum threads appeared in the search results, created by people who once shared my pain. The solution that kept appearing seemed less than regular, however: submerge the disc in boiling water for a few minutes.

I laughed at the premise. Oh, you Internet trolls. What next? Dry it off in the microwave? That scepticism began to fade, however, as the solution became more and more frequent, and delivered with such sincerity. Could it actually work? Well, if toothpaste can fix video games, maybe anything was possible. As I read more, I learned that disc four of Lost Odyssey was packaged in a sleeve in new copies (mine was of course pre-owned), which left a very thin invisible layer of residue on the disc that prevents it from working. It must have been deeply embedded into the disc, as apparently it can’t simply be rubbed off, with hot water being the only removal tool. Well, I still had nothing to lose.

Even though the disc wouldn’t work anyway, I hesitated as I lifted the boiling kettle, Jansen’s face on the disc staring back at me, his eyes silently begging me to reconsider. But I forced myself to flip over the disc and pour the water, and stared intently. I don’t know how discs work – would it not snap, melt, explode, scream in agony? I left it there for a few minutes, and sure enough faint traces of the residue appeared on the water’s surface.

I dried it off and ran back upstairs, all giddy. I put the disc in, and while it got further than it had before, it still got stuck in a few attempts. I took the disc down to once more submerge it in boiling liquid, as I had likely been too impatient before and took the disc out before all the residue had been removed. Another intense watch of the cleansing disc, and another giddy run up the stairs. Another error. It wasn’t over yet though, because I could try installing the game. When I tried installing before, it would reach around 20% and throw another error at me. It happened this time, too, but it kept getting further on the installation bar at every attempt. I kept watching and hoping, thinking maybe I'll get lucky and reach 100% this time. I bet you never thought a loading bar could become so intense.

More errors taunted me, but it progressed further and further each time, and I kept trying.Suddenly, the game had installed past the 90% mark. Could this be it? There were many times during the installation when the machine stopped making noise, which usually meant it was ready to give up and show an error. It seemed my Xbox shared my determination this time, however, and gave it all it had, resuming its duty. Only 5% left. The sound again dropped and the bar stopped. I like to think there was an epic digital battle raging inside my Xbox, between the disc and the system. 3% left to go. Another moment of dead silence after the loud humming of the Xbox. There was no way that it could give up on me now!

Thankfully, it reached that glorious 100%, and told me pleasantly “the game has been installed successfully”. I had finally lifted Gongora’s curse on my disc! And I could resume my playthrough.

Over a decade ago I was blowing my Game Boy and N64 cartridges to get them working again. Now I’m rubbing bathroom substances onto discs and cooking them in my kitchen. It was a funny experience that I had not had since my youth – that desperation and the tension as you can only sit, wait and hope for a broken game to realise your effort and start working again.

I guarantee it was this sly bastard casting a spell on the final disc. He's aware of my unmatched gaming skills and did it just to stop me kicking his ass in the final battle.

If anyone reading has any stories of fixing damaged games, please share! Have any of you discovered strange fixes for your games? Have you too felt the relief of seeing your beloved, broken game working again?

When we inevitably enter a completely digital age, its unlikely we’ll have to fix physical games again. This is great as scratched discs are always a pain, but still, blowing and rubbing our games (oh yes, ha-ha very good... grow up will you?) feels almost part of being a gamer.