6:52 AM on 05.27.2012 (server time)    0
If you look at the line-up of recent attention-grabbing games, you'll notice the majority of them are sequels. Max Payne 3, Diablo III, and the upcoming Sonic 4: Episode 2 are just recent examples. Its hardly surprising - a follow-up to a successful IP can lead to masses of hype from gamers, as it can offer an even bigger and better experience. Rightly so, as some of the best games of all time have been sequels: Super Mario Bros. 3, Resident Evil 4, Final Fantasy VII. Naturally, its sequels like these that are likely to pave the way for many stories of most-hyped games among the blogs for this assignment. Funny, then, that one of the games I got most excited over was Animal Crossing.

Technically, AC is a sequel, but to a Japan-only N64 game that I'd never heard of before. I first learned of its existence from the pages of the UK's old Nintendo Official Magazine. I don't know what it was, but there was something about it that kept me staring at those screenshots and re-reading the information with curiosity. A game with no objective? Although I was young, I had already played a lot of games, and all had presented me with something I set out to achieve. Saving Princess Peach, escaping Raccoon City, thwarting Dr. Robotnik... A game with no goal conflicted against all the gaming instincts I had acquired up to that point.

Yet it was that sense of freedom, the ability to set my own goals and do what I want that appealed so much to me. The only game I'd played that was close to something like that was The Sims, and still that had restrictions - you could make your little people billionaire's and the world's most intellectual family, but you do also have to prevent them from starving and pissing themselves.

But there was more to it than that. The game ran in real-time, and events occurred whether you played or not. Best of all: you could play it forever. I'd never heard anything like it, and I wanted it.

My hopes were quickly crushed, however, when I read that there were no plans for a European release at the time. It still never left my mind though. Collecting Mario furniture, going fishing throughout the seasons and chatting to animals in shirts sounded like something I had to do.

I remember seeing an expensive import copy of the game in a Gamestation store. The combination of the high cost and my region-locked GameCube meant that I could only stare at it, imprisoned as it was in the display case before my eyes - like a poor Charlie Bucket staring intently at his desired Wonka bars.

My golden ticket arrived when sometime later, a new issue said that a PAL version of the game had been confirmed. Hooray! Leading up to the eventful launch, I had asked my dad to pre-order the game for me. Brand new games were a rare luxury back then, as it meant relying on my parents money. And that meant relying on my lazy ass to work for it. But Animal Crossing motivated me, and I felt like I'd do anything to play it. This was a risky decision too, as that would be the one game I'd be stuck with for the next month or two. Of course, I planned on playing it for far longer.

An agonising wait led to the launch of the game in the UK. I remember the day clearly. My Dad picked me up from school on Friday and handed me my copy. I held the game firmly with disbelief and ecstasy.

The wait didn't end there, however, as first we were off to visit my relatives. As much as I love my family and their company, my mind was racing with excitement and impatience as I clutched the game case, re-reading the text on the back and flicking through the manual. From the moment I asked to pre-order to now finally owning the game, I kept wondering if I was insane. How could I possibly be so excited for a game so much, without so much as watching trailers or gameplay footage, or playing it first? I'd always played it safe by buying games I knew I would like. It wasn't like there was anything cool about it either. No zombies, guns, chainsaws, mythical beasts, or even boss battles. Questioning myself only lasted a few seconds however, before my mad anticipation for the game returned.

It was late at night when I got home and slammed the small disc into my GameCube. K.K. Slider soon graced my screen, with his mellow attitude and guitar held in his doggy paws. I can't remember his exact words, but it was probably something along the lines of "so, you finally got my awesome game. I dig that". I was then greeted by Rover the cat on the train to "DarkTown" (my now-embarrassing attempt at a badass town name within an eight-character text limit). Despite the late night, it wasn't long until I was put into Tom Nook's work uniform and familiarising with the locals.

I still remember many of my first villagers: Mitzi the cat, Dotty the panda, Frobert the frog, Wolfgang the wolf. I ran around, talking and completing errands for them, all the while plotting my plans for domination. I would soon become the hero among these animals, become rich from my foreign fruit farms, live in a glorious mansion, catch rare monster fish, fill the museum exhibits with badass dinosaur skeletons. I would turn this simple town into my own glorious empire landmark! And sometimes chase butterflies with my net. 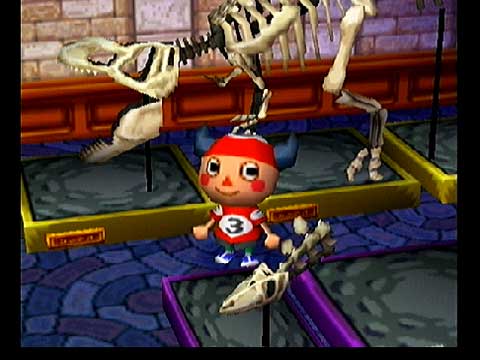 Its safe to say that, despite my ridiculous expectations, Animal Crossing did not disappoint in the slightest. To this day I'm not sure where all of the hype came from, but I'm just glad that it led to me to such a phenomenal video game. Maybe it was that feeling of enjoying something no one knows about - not that Animal Crossing flopped because no one bought it, but among my schoolmates I would be the only one to know of it (until I would show my jealous friends). Owning a GameCube in itself was like being part of a cool exclusive club. Maybe it was the concept of something new and original. I like to think that, even as young as I was, I could recognise that a game with an original enough idea can be just as exciting as a AAA sequel, and like many gamers I could appreciate the value of originality in the industry. While I'll wet my pants with the rest of them at the most vague indication that Half-Life 3 exists, I can get equally as excited at something new and weird. I had similar experiences with the likes of Portal and Katamari, where I simply had to own them immediately, and again it paid off.

Ironically, as successful franchises gain more and more attention with each entry, I found myself far less enthused with each new instalment in the Animal Crossing franchise. I'm not the only one to realise the lack of evolution in the series, but it's also because I just played so damn much of the first game. I enjoyed starting over in the DS and Wii iterations, but nothing could match the experience of my first town. For a game with essentially no point to it, I dedicated hours every day into it.

I'll never forget my time in Animal Crossing, or the time leading up to it. It was the game where waiting until Christmas to receive it wasn't an option. If the game had turned out to be poor, my disappointment could have been overwhelming. Hype for a game can go either way, giving the player something to look forward to or crushing their expectations. As a whole, however, it is a great thing, as it represents our unbreakable passion for the medium as gamers. Its a reminder that we love doing what we do, and its amazing that, even after devoting our entire lives to such a hobby, we can become excited about simply doing it more.

For all the effort, money and sleep that that hype took away, everything was worth it when I dug up that Master Sword furniture piece.
#OpinionEditorial
Login to vote this up!