My new favorite t-shirt ever

I came up with the show shortly after Reverend Anthony Burch left Dtoid, taking his two excellent web series Rev. Rants and Hey Ash Whatcha Playin with him. I hated the idea of Dtoid having absolutely no original video series left, so more out of desperation than anything else, I started Sundays with Sagat. Not a lot of planning, no real strategy, just a video camera, a shaved head and chest, and some terrible green screen work. It was pretty weird.

I haven't done an epsiode of the show for about a year, and though I wouldn't mind doing more, it's hard to prioritize it while trying to keep two other shows (Sup Holmes and Talking to Women about Videogames) afloat, start a new one (Teenage Pokemon) and reboot at least one other (Constructoid). That said, I wouldn't say Sundays with Sagat is "dead". As long as there is at least one person out there that still likes the show, then it will be back.

While there are probably only a few Sundays with Sagat fans out there, their level of affection for the series borders on astounding. Dtoid's own Rob Morrow and his wife are two such fans. They're the people responsible for this Sundays with Sagat "Sunday" t-shirt (a play on the Banksy "Obey" meme). While I've always hoped that my videos would have traits of phenomenology to them, I would have never had the guts to designs a shirt like this, even as parody. To say that I'm flattered by the fact that Rob and his wife created this thing would be a monumental understatement. 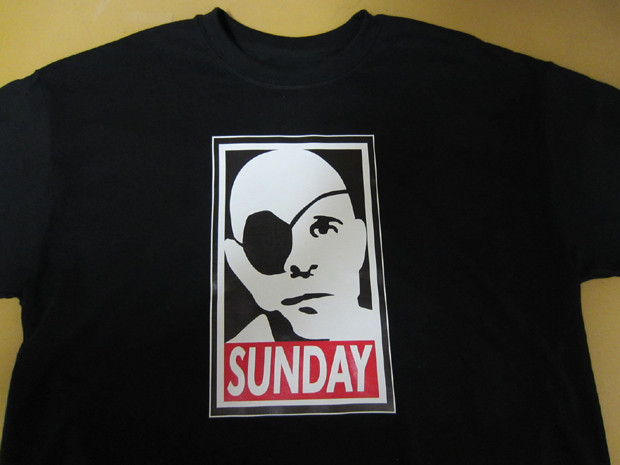 There are 18 more of these shirts in existence as of this writing, and they wont be on sale for much longer. My understanding is that tonight is the last night that Rob is planning to keep them on sale. He only printed a little more than 20 of them, so if you want to be one of the few people to own this unique apparel-based dedication to Street Fighter, weird internet videos, and how dumb I'm willing to act in public, you better act fast.

To be clear, I'm not getting a dime of profits from the sales of these shirts, and I doubt Rob is making much money either. I'm also not quite a "personal friend" of Rob's. I like him a lot, but we've only communicated over the internet (Dtoid, email, and Twitter) and through Christmas cards.

He didn't create this shirt to make money or because we're such close friends. He created these shirts purely out of love for Sundays with Sagat. If I ever do the series again, it will be in large part due to the fact that I want to make this man happy. It's the least I could do to thank him for putting the work in to make my face look good on such an awesome shirt.

Here is the link again if you need it.
#ShareonCommunityBlogs
Login to vote this up!