5:37 PM on 05.12.2012 (server time)    0
With the much deserved sleeper success of King of Fighters XIII, it seems like any day now the irrepressible horse-throttlers at SNK Playmore will be unsheathing their Emphasis Cudgels and announcing the fourteenth installment of this storied series to the terrified whinnies of mares the globe over. Even with that many sequels and eighteen years of consistent popularity under its belt, KOF still feels like a cult phenomenon in some respects, an asterisked success story, a peerless third stringer, the 2-D fighting game equivalent of Jack-in-the-Box. It has its fans, but gamerdom-at-large has never seemed to know what to make of the franchise and its Shinjuku fashionista throwdowns.

Part of the issue may have been the installments themselves, the sheer bulk and breadth of them, and the speed at which they were released (one every year for the first nine years of its existence). In toto, it probably proved too technically and financially demanding to keep up with for most people. Keep in mind, KOF never approached sequelitis the same way Capcom did: tweaking a few things, adding a few things, and sending a 90% recycled game back out the door. No, SNK kept the basic skeleton each year, but always provided new backgrounds, new music, new story and bosses, at least one new mechanic if not an entire engine overhaul, and a ton more characters to choose from, more and more every year. These were full-fledged sequels, new games built off of a familiar formula, each with it's own quirks, issues, and highlights.

What it amounts to almost twenty years down the line is a massive backlog of characters, locations, and plot elements that have fallen by the wayside due to the immense volume of content. The only times the series ever had a chance to stop, catch a breath, and survey what it had accumulated was on the vaunted "Dream Match" titles (KOF '98, KOF 2002), where all the favorite characters from incongruous installments were mashed together in one giant, non-canonical free-for-all. These were an ideal way of surveying highlights that until then felt like speed bumps, and were spaced at the end of major story arcs to help give some stylistic cohesion to the jumble.

Having been a full decade since the last of these installments, and with an influx of new fans who probably aren't familiar with the game's immediate past, much less it's 90's heyday, the time has never been riper for another compilation brawl. And didn't the latest story arc just end in XIII? Hmm.

Here's but a few of the characters I hope make an appearance. 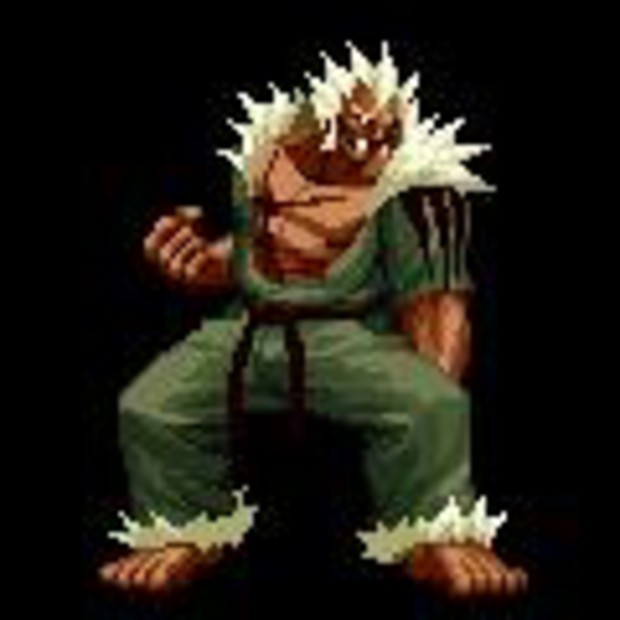 He’s not an Akuma clone so much as Akuma’s mid-life Fat Elvis phase, having porked up and gone to seed in the years following an explosive embolism. “I still got what it takes! I’m still full of murderous intent!” He bellows at his forlorn Street Fighter rivals. They can only respond with doleful looks and tightlipped nods. “You sure are, buddy. You sure are.” They say, turning aside and biting their fists. Never one to be made the object of pity, he drags his ragged bulk away, blubbering quietly once around the corner, swearing he’d show ‘em *sniffle* he’d show ‘em all! And he would, for while the Street Fighters may have qualms about wailing on the physically disabled, the folks entering the King of Fighters tournaments have no such compunction.

Knicked this from the fledgling game site me and my buddy Graey recently started, Citizen Game. It's pretty scant at the moment but if you like either/both of our stuff, pop by every now and then, let us know what you think, shamelessly promote your own boonie web projects. You know, the usual.
Login to vote this up!