I Suck At Fighting Games: Skullgirls, God Hand, and my first arcade stick.

I've never been more than a casual player in most fighting games. Like most kids I dumped quarters into Mortal Kombat machines at the arcade because blood is cool as hell, picked up Soul Calibur 2 for Gamecube because Link is a pretty cool guy who bombs Dodongos and doesn't afraid of anything, and messed around with Street Fighter 2 because it was on every console. I think the deepest I got into a fighting game was Soul Calibur 3, which I played consistently for about a couple months but never got *great* at. So since then I can't say I've sunk any meaningful amount of time into a fighting game, definitely not enough to get good.

Last summer, a couple of my friends online were watching the livestream of EVO 2011. Since I was bored and they absolutely refused to talk about anything else but the streams, I checked it out. I'll be the first to admit that I had no idea what the hell was going on in these games. What's a wakeup DP? Why does everyone want that guy to lose so badly? How can you even ascertain what is happening on the screen right now?

(That last one was for Marvel vs. Capcom 3. A year ago, I would not be able to tell what was happening in this screenshot:) 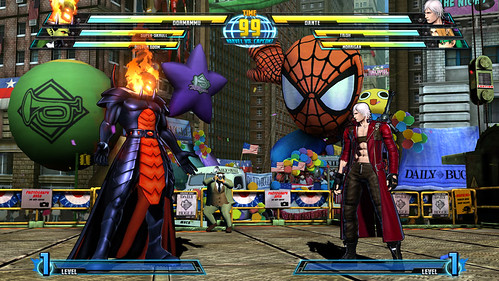 So it was entertaining in a way, but I couldn't fully get into it because I didn't know what was happening. The terminology being thrown at me, all the crazy flashing lasers and particle effects on the screen, the completely daunting HUD...I couldn't grasp any of it. I figure it's the type of thing that you spend a LONG time getting familiar with before you can truly appreciate it. So I liked watching EVO, but I didn't really "get" it.

A few days later, I got God Hand. I picked up this game for cheap at a Gamestop, and little did I know this would be a turning point in my understanding of fighting games. God Hand is NOT a fighting game. Or is it?

Well... no it isn't. But I was shocked at how much depth was in this beat-em-up. It wasn't like the old games in the genre where you mash punch until your opponent falls down and flickers out of existence. In many ways, God Hand has the soul of a fighting game. I discovered this quickly after I tried mashing my way through levels and failing miserably. Then, I went on forums and God Hand fansites to find out strategies of how to suck less. I was little blown away by how complex the game was.

You need to predict your enemy's attacks and launch counterattacks. See them winding up for a super long move? Punish them by hitting them with a quick jab and starting your own combo. Learn which of your moves have invincibility frames so you can get yourself out of a tight situation. Manipulate counterhits to do even more damage. These terms- punishing, counterhits, supers..all sounded pretty familiar after watching EVO. So over the next few weeks, I watched streams of fighting games and God Hand videos regularly because I was seeing this strange overlap. I got really good at God Hand, and its deceptively deep systems made it nearly impossible for me to put down. God Hand is my favorite game of all time, but I can't really keep playing one game forever. So why not take a step out of my comfort zone and start playing some honest-to-goodness fighting games?


After watching so many streams of fighting game tournaments in the months that followed, I couldn't really find a game that was for me. Street Fighter IV looked cool but the huge roster of characters was daunting. How could I possibly devote the time to learning all of these characters to find the one I liked? How badly am I gonna lose online until I can get good? More importantly, will this game even have an online community in the near future? It's kinda old now. So I skipped over that game.

I skipped over Marvel vs. Capcom 3 as well partly because I was nowhere near understanding how tag fighters work, partly because the game just looked unfair. Once you get caught in an air combo in that game you're just gonna eat it until you die. And X-Factor makes these guys doing huge damage in combos even MORE powerful? There's no way I'll play that, I'll get annihilated.

There's also the issue of a good amount of characters being (seemingly) worthless, as 4-5 of them dominate the gameplay I've seen and are hands-down better than everyone else. if I can't play Frank West/Dante/Tron because they don't have good synergy or are too low tier, I don't even wanna play! Frank West is awesome. 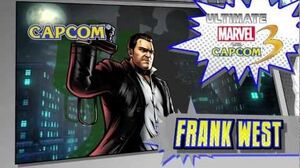 Best character in ANY fighting game, right there.

The game that sounded like something I could actually get into was Skullgirls. I was interested in it from the beginning due to the fantastic art. I decided I'd definitely get it when I heard that it had a fully-featured tutorial mode that gave newcomers enough learning to really understand how fighting games work. So I followed the streams and videos from the game, and when it came out I downloaded it immediately. Here's my experience with Skullgirls so far, and how the game is helping me suck less at fighting games in general.

-The small roster. Like I said earlier, when I'm looking at the character select screen for Street Fighter IV or Marvel vs. Capcom 3, I just don't know what to do. Which of these characters play similarly? What is their style? Which ones are so low tier that they're not worth using?

Skullgirls, having only eight characters, has none of these problems. I've felt no pressure in committing to the "wrong" character because I can get extensive practice with all of them. They're all very different but share enough that switching from one character to another is not like re-learning how to walk.

And the music on the character select screen never gets old.

-The tutorial mode. It cannot be overstated how helpful this is to a newer player of fighting games such as myself. This thing taught me all of those fighting game terms I keep hearing in tournaments. It lays out what they all mean and then you practice them. I had no idea what "hit confirms" were until I went through the "hit confirmation" tutorial. Same with canceling moves into supers, button notation, mix-ups, blockstun...it's just crazy how this game lays out all this terminology so quickly, in such an easy to understand format. Does any other fighting game do this, or are you just expected to know what a delayed hyper combo is and how to do it by messing around in training mode? I don't know, but I do know that this training mode is incredible and more fighting games should include it, instead of just assuming the players know what everything means. Some of us are still new!

-Tough, but fair AI in single player. Every time I finish Story or Arcade mode as one character, I ratchet up the difficulty and try it again to keep my skills sharp. The AI doesn't mess around in this game once you get to Normal mode. Peacock and Ms. Fortune stand out the most, as the former WILL fill the screen with garbage and chip you to death without mercy and the latter WILL relentlessly rush you down and hit you with moves that you can't really tell are high or low. So it's a little rough at times, but if the AI was braindead I'd never get better. I appreciate it.

-Pretty easy inputs. So far I've had the most trouble with Double and Valentine because they have a LOT of moves that have some funky inputs, but for the most part I feel like I can do everything I need to do fine. Most Blockbusters are just quarter-circle-forward (or backward) + two punches (or two kicks). Same with special moves. I have a little trouble doing dragon punch motions, but overall the inputs aren't difficult.

-The training mode. It's missing a lot of stuff and the best way I can explain this is by comparing it to a Smash Bros. game. The training mode in Smash Bros lets you manipulate time and set the enemy AI to various states like blocking/jumping/actively attacking you, and is overall pretty good for a not-so-serious fighter. So why can't Skullgirls have all this stuff? I appreciate the blockstun bar and Sparring Mode, but this desperately needs more options.

-AI isn't ALWAYS fair. Maybe it's just me but I have the WORST trouble with Ms. Fortune on every difficulty. I'm consistently playing Arcade mode on Hard now and not having trouble until she pops up. And just to test this, I dropped down the difficulty to the lowest and was getting annihilated by that specific character. Playing against her is the only time where I've felt that the AI is being genuinely unfair and reacting in a way that a human character cannot...but that could just be me.

-Ratio system needs tweaking. Right now I see no reason to use three characters unless your opponent is also using three. The damage you take when you're playing as a team of three is enough to completely put me off three person teams, no matter how good some assists are. It doesn't seem practical.

-Lack of polish. These are just general nitpicks, I know it's a $15 Arcade game but the load times are really long and frequent, the Story mode, while well written, has bad Powerpoint syndrome where characters need to blink off screen and come back with different faces instead of subtly transitioning, there's a strange and frequent (for me) glitch where characters briefly turn into hitboxes, and there's an "Extras" menu that clearly has room for some extra options that just aren't there. The biggest complaint is the lack of an in-game movelist, which is kinda silly when the game is so good at tutorials but lacks a basic feature such as this. And you can see the names of the moves when you program assists so you KNOW it's in there. Stop teasing us. Come on.

Overall, I'd say Skullgirls, specifically the tutorial mode, has given me a significant step forward at not sucking at fighting games. I had some prior knowledge of the genre just from watching so many damn streams and playing so much God Hand, but I really appreciate it teaching me legit tactics and fighting game terminology that I don't have to scour the internet for.

I also got my first arcade stick! It's this one right here:

I'm still getting used to it, but I don't regret this purchase at all. It's so much easier to use than a normal 360 controller, and I'm almost never messing up inputs now. It's a little heavy but it also doesn't feel like it's ever gonna snap in half, so that's a good thing. Highly recommended.

I'll be getting Soul Calibur V and writing about that next time. If the giant walls of text didn't scare you off, thanks for reading! I promise it'll be shorter next time!
#ShareonCommunityBlogs
Login to vote this up!