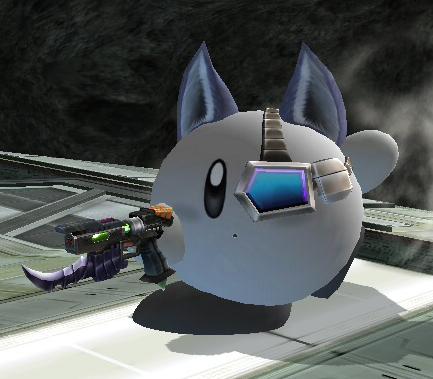 This week, it looks like we only have one host to fulfill you portable wishings. Wolfy-Boey will be hosting Mariokart 7 as per usual, and he will be starting with Balloon Battles. Fun times, yo.

Mariokart may be getting a much-needed change soon, as some of you may be aware. According to Nintendo, a patch for MK7 should be arriving "Mid-May." So most likely next week's FNF will be different, if only in the slightest. At the very least, the Maka-Wuhu glitch should be done with. I really hope Nintendo uses this opportunity to listen to some of its customers, because this game needs some new options for online play. Badly. It's still a pain to actually get a specific group together to play, which makes this whole thang much more annoying than it should be. I just want to play with you guys!
Mucho thanks to Wolfy-Boey who has been hosting a serious consistent basis. Give him a hug and a cookie.

Let's pop each others' inflatable parts.

In case you're new to Friday Night Fights, I'll sum it up: It's basically a bunch of Dtoiders getting together to play some games. Pretty simple stuff. If someone has a game that they want to play online with others, it can be posted here or in this blog. That's the easiest way to get a game going. Now, I'm talking about ANYONE. If you have something you want to play, let me or Wolfy-Boey know, and we'll put it in the blog and the forum. Cake.

You can exchange Friend codes here, or on the forums


FOR MARIO KART 7 PLAYERS: When playing Mario Kart 7 we will be using community feature to play together. To join us, simply enter the Dtoid community code (For races: 43-8816-8269-4512) and wait in the group. Please try to be patient and wait for other players, as once a Grand Prix starts players cannot join until the entire tournament is finished. Each group can only have up to eight players, but there can be an infinite amount of groups playing at one time in each community. Now, before you try to join a group check how many groups are playing already. If you see one or groups playing, but when you join everything is empty, then the match has already begun. Try leaving and then joining again in a few minutes. An easier way to do all this is to exchange friend codes and spam the "Join Game" feature on your fiend list.

I hope this clears up some things and makes this process a little less frustrating. Still, think of all this as some challenge before a sweet reward. It's like Dark Souls, yo.---Wolfy-Boey


All dem headers (and avatar) made by dat chillybilly