Some of you might have caught me ranting about its amazing soundtrack on twitter, seriously go and have a listen, you won’t be disappointed.

Hitboxteam, where have you been my whole life? After completing Super Meat Boy almost obsessively while enjoying it throughout I thought to myself that few games would match that delicate balance between being tough-as-nails but also super rewarding as you progressed, giving you that addictive incentive to keep on trying like the one Super Meat boy pretty much nailed (fuck you I want to be the guy stage). Well I was wrong. Presenting Dustforce, in which your task is to sweep one of 4 distinct and environments (forest,city,castle,laboratorium) clean from all of that icky dust(or leaves / goo depending on your location). This is however more tricky than it seems as the filth (as always) manages to get to the most hard to reach places (for example the freaking rampart of a castle) and it’s you job as one of four unique and beautifully animated and highly acrobatic cleaners to make it go away. 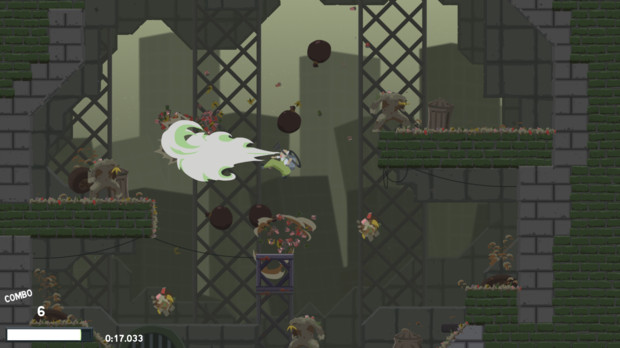 Lastly I wanted to write a little something about the presentation which is pretty damn good; the characters are all fluidly animated and varied (watching gramps as he uses his vacuum to glide on ceilings while spinning around never gets old). The palette of most levels isn’t vibrant instead it’s pretty brown and dark which kind of works seeing as your goal in the game is to clean up a filthy world, to nitpick the foreground could have been more distinguished as it can be hard to make out what’s a wall or what’s in the background at times. The soundtrack is nothing short of stellar and managed to capture my imagination like few soundtracks has done before it, like the game's presentation it focuses more on atmosphere and manages to excellently portrait say the desolation and sadness of a abandoned castle as the moon shines in. Yet it still packs some of that NES era catchiness with songs like (Cider time) cheering you on as you (hopefully) blaze trough the levels , the first time I saw the teaser trailer for the game with that song in it I knew that I would ejaculate all over this soundtrack. To make things even more insane he mentions that this is his first completed musical project, seriously give this guy some cred!

With the newly added level editor and a website for the community to share and rate player made levels (some stellar and super-imaginative ones have already been popping up!) and a patch fixing my only complaints about the game it’s hard not to give Dustforce my highest regards, if you love challenging yourself and feeling like a ninja Dustforce will not disappoint.
#ShareonCommunityBlogs
Login to vote this up!