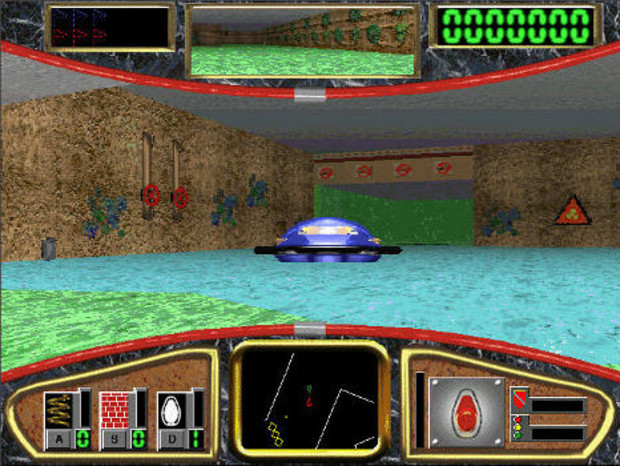 All of this was surely unintentional, of course; the awesome feeling of being lost in a hostile maze was due to confusing and unintuitive level design, the tension of being in an indistinctly claustrophobic world was thanks to the blurry and poorly filtered visuals, and the sense of isolation was brought on by the lack of friendly AI or any multiplayer option. But did the fact that the crack team of Microsoft engineers probably never gave a single consideration toward making Hover anything but a short, mindless half-advertisement stop it from acting on me in such a significant manner?

Certainly not. Perhaps the pools of nostalgia I haven't yet managed to towel out of my eyes are coloring my viewpoint somewhat, but Hover, completely unintentionally, manages to hit a kind of atmosphere that many modern games can't do when they're trying their very best, and I can't help but find that to be incredibly neat. Now, if you'll allow me, I have to pop out the door for a second - there's still a six-year-old high score to beat.

(If you want to try Hover yourself, you can download it for free off of Microsoft's FTP server! Check out the "External Links" section at the bottom of the Wikipedia page I just linked)
#ShareonCommunityBlogs
Login to vote this up!