Mass Effect 3 Multiplayer: Success or Not?

So Mass Effect 3 has arrived and despite a successful critical reception, all hell broke loose within the fanbase regarding the ending but enough has been said about that matter and I'm sure even more discussions and debates will pursue once the "Extended Cut" arrives. So what about the other much talked about topic regarding the series? Multiplayer....

Many negative views were expressed once EA/Bioware finally confirmed the inclusion of multiplayer into what was previously regarded as a personal single player only experience, with the main worries being development time and resources spent on a mode that was not required and it would be a tacked on element in a attempt to get more sales with the conclusion being the single player experience would suffer.

Personally I believe Mass Effect 3 to be a terrific game despite an underwhelming finish to a mostly well written and designed intellectual property. Mass Effect multiplayer is one of the most pleasant surprises I've experienced this generation, the combat is solid, the difficulty ensures satisfaction should you complete a mission and the maps in general are well laid out and crafted.

The positives outweigh the negatives and what gameplay negatives there are could be fixed in future DLC and patches. One negative that does stand out is not entirely down to the developer bur rather the gamer itself. From many hours with the game, I have come to the conclusion that to get the best experience possible, it is highly recommended you try and get together with friends rather than play with random people. Due to certain design decisions for Mass Effect 3, playing with random folk can at times be a very tedious and irritating experience. 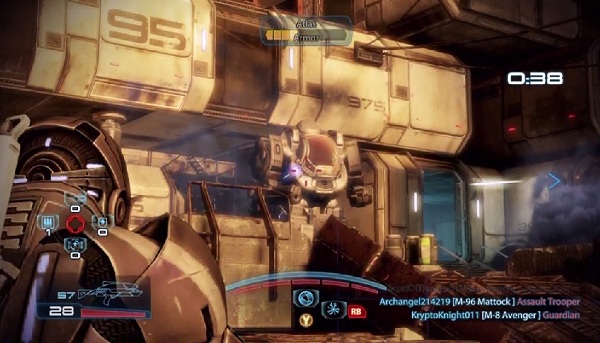 Bioware decided to give the player customization options within a game lobby aswell as the main multiplayer menu itself, whilst most games throw the player into a match as quickly as possible without
the option to customize in a ready to play lobby, Bioware decided to give the player both options and this has its downsides. I have never experienced a multiplayer game with so many people playing yet taking so long to get started. Almost every match with random people has at least one person keeping people waiting rather than doing the simple thing and getting the match started, which was why the said person entered the quick match or create match path in the first place no? There has even been some suggestions on various forums and social networks that such the reaction from strangers sending messages in anger to those delaying the match, that more people should keep doing it as the reactions they get are amusing to them. Personally I believe it's bad manners keeping people waiting like that, I don't like it as it becomes tedious after a while so I certainly would not do it to others.

Overall, it is my opinion that the multiplayer in Mass Effect 3 has been a success and I look forward to future entries in the series included it and seeing what can be improved on. Do fellow fans of the series feel the same?
#ShareonCommunityBlogs
Login to vote this up!