The Rhythm, the Stick, and Serious Sam 3: BFE 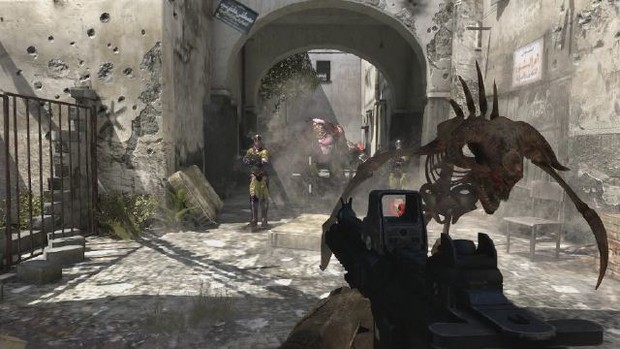 Looking at the dozens of things that pass through my mind during a firefight highlights the intricate, brilliant design work that at first is masked by the horrendous animation, glitchy shadows, awful dialogue, and general roughness on the game's surface. The detail went into mechanical things - each enemy has a distinctive spawn and movement sound, from the trademark "AAAAAAAAAAAA" of the kamikaze to the thunderous stomping of the raging bull. Their AI and movement is straightforward and predictable out of necessity, not laziness - precise timings and rhythms are drilled into my head, to be called upon (along with each highly distinctive but equally useful weapon) as notes and flourishes in the destructive symphony that I must flawlessly improvise during each battle.

Where, say, Bulletstorm drives the player to pull off awesome stunts through the carrot of points and upgrades, Serious Sam 3 punishes doing anything else with the stick of swift death. Where nailing a sick riff in Guitar Hero rewards you with a sky-high score multiplier, stringing together flawless rocket hits and dodges rewards you with a precious two seconds to collect yourself and prepare to do it three more times. Survival isn't the minimum line - it's the only one.

It could be said that this line of thinking is archaic, a relic of the days when video games were intended for nobody but children and neurotic obsessives - where even completing a game was a privilege to be enjoyed by the skillful few. I would have to agree with this, and concede that it's probably for the better that most games aren't designed with the same philosophy. But as the one-off throwback that it is, I can't help but be impressed at Serious Sam 3's big noggin, and how sneakily it hides it behind the gore and explosions - it's something I found myself missing dearly in the modern era of shooters. I can only hope it finds its way back.
#ShareonCommunityBlogs
Login to vote this up!