11:15 AM on 04.16.2012 (server time)    0
Technically speaking Skullgirls sets itself up to be a future-proof and feature-packed tournament mainstay. It does well at opening players up to the complex world of fighting games and creates a solid foundation for nearly perfect latency free online multi-player action. The intense one vs. one, two, or three gameplay is exceptionally well balanced, taking away any need for a strictly tag-team mode. It's just too bad that this game tests to see how much patience you have for the genre.

The story of Skullgirls is simple, there is this thing called a 'Skullheart' and you want it because it'll grant you a wish. So each of the eight characters has a back story illustrating their brief history and motivations for the attaining The Skullheart. The story is shown through a set cut-scenes, if you can call them that, which are nothing more than generic slide shows of illustrations and text with very few mildly animated bits peppered in. The back stories are flimsy and the motivations are incredibly vague and obtuse for some characters, which makes it unclear who some of the characters are and why they are doing what they are doing. With that said there admittedly isn't really any solid story other than eight girls whom already appear to have special powers are looking to get a wish granted by getting something called 'Skullheart' from the 'Skullgirl'. Coming out of the story mode I found that each of the eight characters is actually already a Skullgirl, going beyond their art styles and skull motifs. There are a few moments because of this characteristic that it seems the game is going full circle, which grants an illusion or supposition of depth and mystery. Perhaps it's better to allude to the presence of story than to actual articulate it in this case as one of the characters is an undead zombie cat girl who lives with fish people whoes motivation it is to ressurect her 'lost' family, which you'd only have to assume means dead. That's just one character and it's a mess, so really pasting stories for an anthropomorphic pile of demon-goo, some kind of nazi-type nun, and some kind of Voldo creature with their spine attached to a metal wheel which they use as a weapon, pretty damn taxing. Any hope of incorporating these characters into one cohesive story is a pipe dream.

The sound effects and music are forgettable. Although it's clear an effort was made on the characters voices, which all sound like they fit very well with the characters save for a garbled and silly character called 'Double' who is some kind of incomprehensible demon-goo and whoes voice is audible but filtered through a generic 'underwater' effect. What little voice acting there is ,none of it is all too exceptional but it is passable.

Skullgirls leaves it up to the player to better verse themselves with each of the eight characters. Observing each individual characters attacks and abilities is incredibly important as it puts you in a position where can be aware of what is being executed onscreen at all times. You have to want to be good at it and you will not even be half-decent without practice. It is a game you cannot play at all -unless you are willing to put time into preparation and training. The problem with having done this literally destroys any hopes of having decent local matches with anyone who isn't familiar with the game.

The tutorial feels like a challenge mode with four difficulty settings, the first two are a cake walk. The first levels, teaches you basic movement, blocking, and jumping. The second levels move you into understanding chains, combos, and breaks. The third levels move into more technical aspects such as hit confirmation and a few other fighter nuances like breaking combo chains, recognizing open attacks, and seeing prime time to block. The fourth level tutorials can become frustrating very quickly as they are sets of complicated ques pushing the player to link special, jump, crouch, and standing attacks. With these ques being displayed as:

To anyone familiar with fighting games you could easily interpret 'F' as forward and 'HK' as high-kick, so that easily makes the first move forward+high-kick,. This leaves players to ask themselves, "What button is high-kick?". The option to display buttons instead of jargon can be testing at times, leaving players to check their button layout. The omission of scrolling input history is an inexcusable training-mode oversight which extends itself into the tutorials. With that said, the tutorial is absolutely necessary to verse yourself with the mechanics of the game and completing it is the only hope to beating anyone online or even getting past the last boss in story or arcade mode.

The tutorial is the only place you will find move lists of any kind. The training-mode allows players the rare opportunity to view hit-boxes which is a nice little detail, but doesn't save face for the omission of move lists or input history which are nothing new to fighting games and there is no excuse as to why these are not in the game. In the Skullgirls menu system, there are suggestions for players to go to the Skullgirls website and download the move list guide. Which upon checking out you will see is a .pdf with some pictures detailing nothing more than character specific move lists, some of which are only three character specific attacks long. Why this .pdf is not pasted into the game is unclear, what is clear though is that asking players to sit down at a computer to download and possible print it for reference, is unnecessary. Moreover, sending players to a generic 'put-files' site is tacky on an almost unprofessional level. 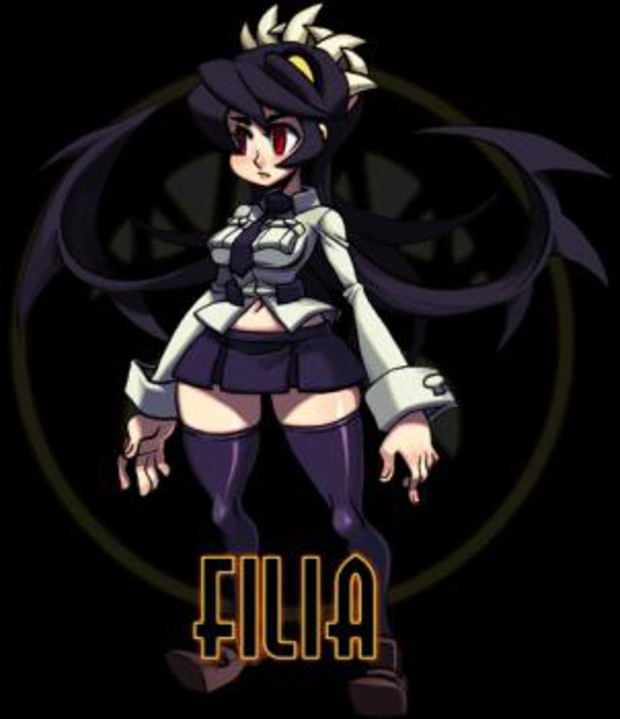 Without comparing Skullgirls to any other fighting game that's ever existed or will exist there is really only one defining feature about the game that encompasses all of its charm and any hopes it might have of being relevant latter. All and any of its success is based purely on its animation and on its animation alone. The animators for this title take up much more than half of the credits and with good reason, the polish is exquisite and any fan of 2D or hand drawn animation will be drooling over it, regardless of the characters being a female cast.

Animation is not enough however to save this title from being just another fighter. Even with characters designed to be as charming as a zombie-cat-girl can be, it just isn't enough. With only eight characters and without any move lists Skullgirls falls flat on having hopes of a well executed delivery, and saves itself only on its style and presentation, which carry the entire weight of its faults and imperfections.

The move list thing is odd. Especially when there is no character with more than a dozen moves. Sure the move lists would have been short, but even more reason to have them in the game. I mean, with lists so short they could have been implemented as an option to be supper imposed into the background like in the tutorials. Which I should mention, covers every characters special attacks even though it might not feel like it.

I have to admit, at first I had a hard time wrapping my mind around the controls. The tutorial took me far too long to finish but I did not finish it begrudgingly either. Sure, it was a little late, I had other stuff going on, other things on my mind, but I was totally into it.

Something that bugs me about this game is that obviously, a lot of attention and detail was put into it, but aside from the animations, you really cannot tell. For instance, the backgrounds are fucking garbage. Some of them literally look like smudged crayon - if this on purpose to make the clean lines of the characters and effects pop out more, I cannot say that a little pastel and some final changes would not have made the presentation better but it would not look like smudged crayon.

Also, all of the animation is glorious, really well done stuff, save for one move that caught my eye. Cerebella has this messed up throw move and it looks really cheaply put together in one spot. The orange hat-arms thing pushes the character onto a blade and it looks like shitty key-framed flash animation, tacky. I mean, they could have put a throbbing vein, or some kind of indication of stress into the muscles of those giant orange arms, but it is nothing. It is a still animation of the arm moving down and then it stops, a little spurt effect, and the arm starts to move again.

Also, only having eight characters and being priced at $15 is fucked when several King of Fighters games are on PSN for less. In fact there are many fighting games on PSN and XBLA which are a lot cheaper and perhaps by rights, better in a lot of ways.


What will have made it better for me:
Better backgrounds, on top of a properly integrated move list for each character and input data during training and the tutorial would have gotten a bit more, and with at least two more characters that truly stand out from the others and have at least as much story mode slides as any of the other eight would have brought this game up by almost a full point. If all of these criteria was in the game it might have received an 8/10 from me.

With all of that aside, I enjoy what there is in Skullgirls. It sounds like there is more on the way for the title - which I did not nor will I factor into this review. This is an as-is basis at launch, this is it, fuck it, it is what it is and I like it, although I find the $15.99 price is a bit steep.