Thanks to an awesome Dtoider

6:31 PM on 04.11.2012 (server time)    0
So there I was, working in my office. Well, "working" would probably be more appropriate, but I'm sure some actual work was also getting done as well. Anyway, a student of the major university that I work for walks in for his scheduled appointment with an advisor. The student takes a seat just happens to notice several of the gaming paraphernalia that I have on my desk, including one spectacular bobblehead at the corner. 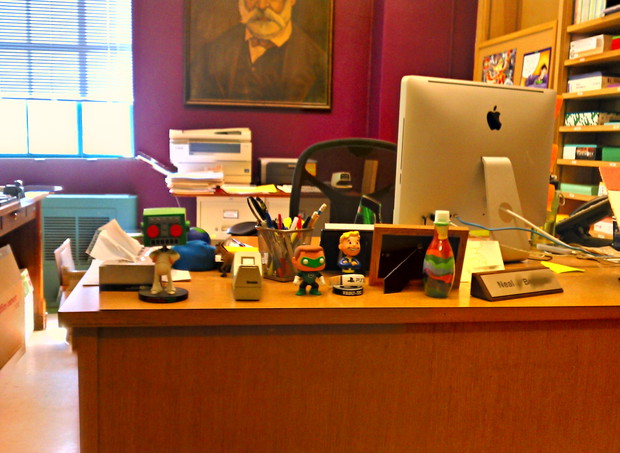 Not only is the student a gamer, but he also happens to be a fellow Dtoider. We then start talking about games and what we've been playing. What we look for in games, what we're highly anticipating (as it happens we're both pretty stoked for Borderlands 2). We also started talking about older games and how we are both building up (or rebuilding, as it where) our classic games collections. I happened to mention offhand that I have been wanting to buy an N64 for a while now, but I can never justify it because every time I got to a used game store I remind myself that I'm trying to save money for a wedding and a honeymoon. If you just read that sentence in 7 seconds or less, then that is about the exact amount of time that I said it. As I said, it was an offhanded comment which I didn't even think twice about and we started talking about other favorite old game systems.

The student gets called into his appointment and leaves. I'm pretty happy because I don't actually get to talk about games very often at my job, and this was even better since it was with a fellow Dtoider. I begin "working" again and about 25 minutes later the same student stops back at my office. "Hey Neal," he says. "You said you were looking for an N64, right? Well, I've got one that you can have. Consider it an early wedding gift." I was definitely not expecting this, and was actually worried that I might get in trouble for accepting a gift from a student. This was on Friday, so I thought that he would be like a typical student (i.e. like I was back when I was a student) and probably just forget about it over the weekend.

Nope. When did college students actually start remembering the promises that they make to people that they only just met? He actually calls my office on Monday to make sure that I'll be there and that he'll drop it off before 5. So obviously I'm a bit worried again and go to talk to my supervisor. I explain the situation and my boss understands my trepidation, but he says that since I'm not really in a position to give him any sort of favorable treatment for anything, and since he's just giving it to me as a friend, then there's nothing wrong. So there we have it. I get an N64 (thanks for including Super Mario 64, btw), an new friend, and I'm not in trouble at work. Thanks JotGarden!
#ShareonCommunityBlogs
Login to vote this up!