From Randombullseye at PAX East: My version of an X-Com Preview 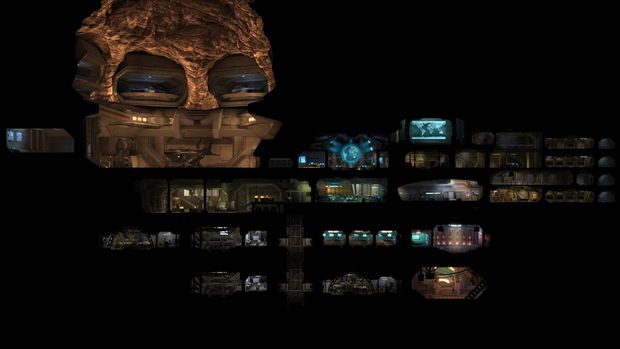 Then we're shown what he called "the ant hill." This was our home base. PR Guy described it as a GI Joy carrier toy that our rich friend had when we were kids. I don't think anyone understood the, I got the idea. As I look it up now, the toy he wanted to say was the GI Joe headquarters, which looks pretty much identical to what I saw. Each section inside the X-Com base seemed to have characters doing things, which you could zoom in and see, such as soldiers in the infirmly or over in a gym working out. Things then switch to a research lab where, as in the original, you have scientists study things you recover from previous combat missions. He then switched over to the engineers part of the base, where they used that research to build armor for our troops. Done deal.

Our demo ended with some sort of alert playing from the mission control part of the base, where then a cinematic played. Seemed like the type of game I want to play.

We then asked questions:

- Ship to ship combat hasn't been implimented yet, "back at the office" they're working on how to resolve that now. They did show the interceptor in the X-Com base, where he claimed it would be "fully customizable."

- Game would be coming out "Fall 2012." I would not expect it until later in the year, hopefully by Christmas we'll be blasting aliens in X-Com.

- I would have asked the guy about capturing aliens alive, had I not tripped on the metal stairs on my way out and felt like stupid.

- This video Samit posted from last month, has footage snippets from the gas station demo.
Login to vote this up!