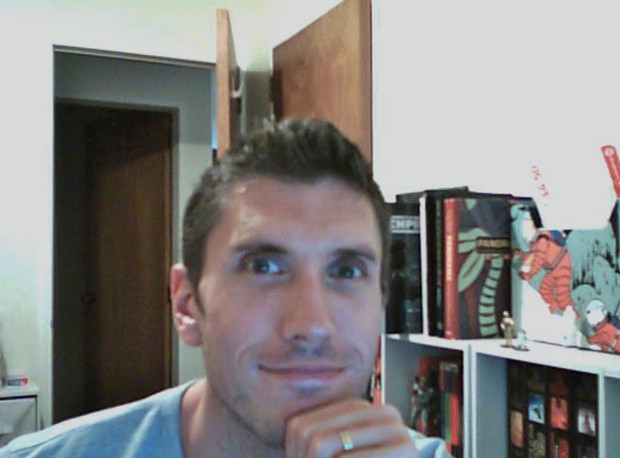 Back in my last couple of years of High School I started going to the gym to work out. However, being young and dumb I really didn't understand the whole concept and lifestyle behind working out. This meant that I ate a lot of pasta and did some half-assed weight training at the gym to try and bulk up. What this lead to was me putting on a lot of weight, to the point where I eventually got to 95kg (210 pounds). The "mildly obese" is a quote from my doctor at the time, I didn't realise he thought this until I got my medical records a few years ago and had a read through them.

About five years ago, at the age of 27, I started seriously working out. Prior to this I would have bursts of exercise activity for a few months and then gradually lose interest and give up. I have consistently exercised for the last five years now, and in particular during the last couple of years I have gotten really serious about it. My focus is mainly on resistance training, but I throw in cardio rotations in every once in a while to keep my general fitness level up. It's now at the point where if I go more than a couple of days without exercise I really notice it and get pretty grumpy and unhappy. I simply have to exercise. I'm actually doing correspondence study towards being a personal trainer, but that's going pretty slow. I'm definitely not the most motivated person when it comes to study.

3: I once performed essentially naked in a play

This one takes a bit of explaining, it's one of my favourite acting memories. I used to be part of a theatre group called The Loopen Experiment, and we performed a Butoh dance piece amongst World War II gun emplacements on the hills around Canterbury, New Zealand. Yes, we were definitely an experimental theatre group. The first portion of this production was basically four of us totally naked, covered in white body paint, with only a strip of fabric hanging down between our legs to hide our shame. It was so fucking bizarre. I remember while we were warming up before the show a Japanese tourist who was hiking through the hills stumbled into the engine room we were performing in and promptly screamed and ran away at the sight of us.

4: I've never been in a serious fist fight

The only time I've actually punched somebody in anger was when I was about 8 years old, and a kid at my school was bullying another kid who was walking around on crutches with a broken leg! That was a pretty dick move, so I stepped in and got into a tussle with the bully and threw a few punches at his gut. Since then I've managed to avoid physical confrontation. Luckily I grew big quite early, so I managed to avoid being bullied myself at school. In my adult life there have been a few situations where things could have gotten physical (ooooerr) with other guys, but I've managed to talk them down before the shit hits the fan. I'm generally a pretty laid back guy, I've got no interest in confrontation with anybody unless it's absolutely necessary.

I have a condition called "essential tremors", which is basically a constant tremor in my body whenever it is tensed. So, if I hold my hand out in front of me and tense it then it will shake. If I'm just sitting on the couch relaxed then you wouldn't notice anything. This has been a hassle all of my life, and I was incredibly self-conscious about it while growing up. Even now I find I have to explain it to people early so they don't think there's something really wrong with me, particularly when I'm exercising with them because when my muscles are tensed while lifting weights it's definitely noticeable. My dad has the same thing, apparently it's commonly passed on from generation to generation. So, that's a bit shit-house.

6: I've had my heart broken only once

By a girl named Rosey, about 12 years ago. Anybody who has been through this kind of break-up can attest to how much it fucking hurts, and I was pretty much a wreck for about 3 months. What got me through this time? Final Fantasy X! I played this game almost non-stop during this period, and it really took my mind off of things and gave me time to heal.

7: I never thought I would get married

Until I eventually got married. I'm not really sure why, but in my teenage years and my early twenties I always told myself that I'd never get married. I didn't see the point of it, I figured that if you were with somebody that you loved then simply making your own personal commitment to them was enough. What difference would putting a ring on her finger actually make? But then I met my wife, and within a couple of years of being with her I noticed a definite change in my thinking. I wanted to make the ultimate commitment to her, and it seemed like marriage was the next logical step. We've now been married for a little over a year, and it's fucking awesome!

8: I own a copy of PAL format Suikoden on the PS1

This is my only valuable game. It's in almost mint condition. I keep it sealed in a bag to try and keep it as safe as possible. I didn't buy it for collection purposes or anything, I bought it years ago and played through it back when I owned a PS1. I didn't realise it was valuable until I noticed it on an auction website for about $200 NZ a while back. I honestly don't think I'll sell it, but it's nice to know it's a valuable little collector's item.

9: I've lived in three different countries throughout my life

I was born and raised in New Zealand, but when I was 24 I went traveling around Europe for 3 months before settling in Edinburgh, Scotland for 6 months. I lived in a tiny little "box room" in a flat with 4 other people, and worked at a kilt store and at HMV. I eventually got incredibly home sick and bought a ticket back to New Zealand.

In 2008 my then-girlfriend (now wife) and I moved to Melbourne, Australia, for a work opportunity for her. It was fun, and we enjoyed Melbourne a lot, but once her work contract expired after 12 months we realised we missed New Zealand and all our friends at home too much so we moved back.

This goes back to my time living in Edinburgh. When I first arrived I was pretty low on cash, and a friend of mine hooked me up with a job working Friday and Saturday nights on a party bus. The name of the bus company was "Club Class", they're still operating actually. Here's their website: http://www.clubclassbus.com/edinburghinfo.htm

The job basically involved dressing up in a pilot's uniform and chaperoning party groups from bar to bar, and chatting with them and generally making sure they had a good time. The whole thing started off well and I genuinely enjoyed it, it was like being paid to party every weekend. Before long, however, it really started to drag, especially once I got a day job and was exhausted by the time the weekend rolled around. I actually stuck it out right up until I left Edinburgh to head back to New Zealand, but my heart wasn't in it. My boss definitely would have fired me before too much longer.
#ShareonCommunityBlogs
Login to vote this up!