1:33 PM on 04.07.2012 (server time)    0
I've played a lot of Japanese games, I won't lie. I've noticed something very peculiar about them though because of this, there's a mechanic that is seemingly ubiquitous in them. The ever-present mechanic I've noticed, is Visual Novel dialogue and storytelling. It's used in games such as Valkyria Chronicles, Disgaea, Advanced Wars, Metal Gear Solid, Ar Tonelico, the list just goes on and on. I'm so used to Visual Novels that I've almost taken it for granted in Japanese games, but since it's so prevalent, it should be observed for its form and purpose even more. This raises some interesting questions: What is the history behind it, why is it used, and how can we possibly benefit from its use? Well, let's take a look. 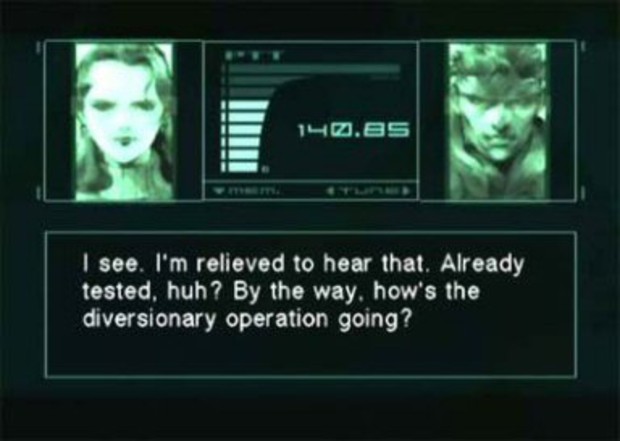 (Metal Gear Solid is one of my favorite series, but is not without it's flaws)

In the long run, what have Visual Novels really shown us this week? What did we gain out of observing Visual Novel segments that we couldn't have possibly learned from just looking at cutscenes instead? We may have learned about their history, and their use, but we've also learned about in-game context and using narrative as pacing. While having Visual Novel segments that read like a book, or cutscenes that operate like a movie, may be the easy and simple way to deliver narrative, it's important to consider the rules of the game world and the context in which it operates in. Would Metal Gear Solid have been made better if every codec-call read like a book, describing the emotions and details of the people in the dialogue? No. By restricting our narrative to the game world we also are given a viable and immersive pacing option. While you can cut out all of the cutscenes of any recent Final Fantasy game, splice them into a movie and ship them off, you cannot take out the Visual Novel elements of a Persona game and have it remain a full experience. This way we're given a deep and immersive way to interact with our games worlds while being able to enhance narrative and save on production costs that could be placed elsewhere.

Visual Novels if used wrong, can make a game feel like a broken, mashed together experience, but if used right, can provide great story-telling that exists within the context of the game. The key to Visual Novels, like much of game design, lies in the fact that observation is required to use them properly and effectively. Through observation and innovation we can find other ways that the Visual Novel can be used. Perhaps even American made games can learn to utilize to adapt the useful-ness of the Visual Novel, perhaps we can evolve it into something else entirely. The Visual Novel represents something that can always be made better by simply, taking a closer look.

Addendum- Once again, Destructoid's very own Liam Fisher has helped me edit my article! Thanks Liam! Also, feel like I've missed something? Don't quite agree with me? Feel free to write a comment! Learning is best done in groups!
Login to vote this up!