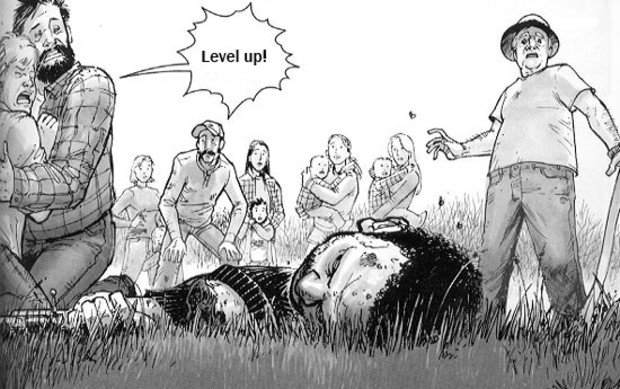 As with the end of every expansions lifespan, boredom begins to sink in, and I decide to freeze my WoW account until the next expansion. The biggest problem with this being after about a week I want to play a new MMO. After much trial and error with new MMOs I find myself wanting something new, different, and exciting! While my idea is not original and is completely tangible -- this blog is more of a focus on my opinion on how the game should be handled in terms of game play, presentation, and substance. I am aware and really excited for the "Class 3" project by Undead Labs that will make its way to XBLA in the future.


I am a pretty simplistic - easy going guy when it comes to expectations, I like my beer cold, my flags American, and my zombies dead, and there is nothing wrong with tried and true clich�s. Dumbing the overall plot down is not necessarily a bad thing when it comes to the legions of undead waiting to feast on your flesh. When it comes to the survival brand the most important part is the player�s personal trials and tribulations of the players involved. The focus on how the world came to be becomes almost miniscule when compared to the personal narrative of each survivor and their non-stop struggle for survival.

Personal narrative in MMOs has always been awkward territory, though better in recent years it is still a work in progress. The hardest task is finding the right balance between generalized plot points that fit every possible outcome, yet still not so broad that the player feels excluded. I felt that a great example of how to remedy this was DCUO and the post solo instance cut scenes. It was a very well presented collection of comic panes that delved deeper into the psyche of the hero or villain that you just defeated. It did not try to awkwardly fit you into the storyline, but at the same time drew you more into the story learning more about your enemies.

Plus it is very pretty!


The overall game play would be of the third person shooter variety that Left 4 Dead has done very well. While the game is suggested to be played with other players it is not required as you are capable of doing instances solo. While doing them solo is an option it is at a scaled down difficulty which also means scaled down loot.


The game would revolve around 4 main character classes each with their own personal strengths and weaknesses bring a level of diversity to the game play. Sorry for the lack of creativity when it comes to class names, but sadly that is just not my expertise.

Soldier/Brawler (tank, dps): This is your run of the mill tank class focused on leadership, moderate damage dealing, high damage mitigation, and crowd control. This class focuses more on heavy weaponry to draw in the hordes of zombies to assure the survival and safety of the rest of the party. The Soldier/Brawler is also very capable of hand to hand combat utilizing items in the environment to their advantage when ammunition is at a premium. Though the Soldier is capable of dealing higher damage and absorbing more damage, the Soldier is slower than other classes.

Trapper/Demo Expert (dps, support, tank): This class will play hand in hand with your tank assisting in crowd control to keep the focus off the core dps and support classes. The Trapper�s focus is luring the hordes into cleverly placed traps for maximum efficiency and damage. While not as effective as the Soldier in terms of defense this character is capable of tanking with clever use of the tools at their disposal. This character is capable of modifying weaponry and ammo for more power, and capable of repairing items. In the end this character is the jack of all trades but master of none.

Gunner/Sniper (dps): The Gunner/Sniper class will focus only on dealing damage and dispatching enemies with the upmost efficiency. The Gunner/Sniper is capable of using and mastering any type of firearm at their disposal. Whether you like to run and gun for maximum carnage or like to take your time to focus in on your target with a well placed shot for the kill this is the class for you.

Medic/Chemist (support, dps): Almost every MMO has a need for a medic in one form or another. This character will focus on keeping the rest of the party in good health. The Medic is a master of utilizing resources to provide provisions for the party. The Medic is also able to create concoctions to help raise party morale and immunities. Though a support class the medic is capable of holding their own in a fight by using their vast knowledge of chemistry to create deadly mixtures to fight the undead.


The specialization system will allow you to build your own unique variation on whatever class you choose. A perfect example of this sort of thing done well is Borderlands. While you are bound to a certain class it doesn't mean you cannot be unique and still customize your character to your personal play style. While this seems to be a staple of MMOs I felt Borderlands did a great job of making this work for a shooter. Even if you are in the camp that it was just a complete rip of other games various "talent" systems; what works, works.


All of the games combat would be instanced; the ability to seclude a player in their own personal story while still existing in a massive environment has been a huge boost to story progression. This allows for very intense scripted moments of game play that can often be quite memorable when done correctly. This also gives a chance for developers to give a nod to the greats *wink* MALL LEVEL *wink*!!
The world outside of the instances would be a collection of safe zones in which players can socialize, trade, and purchase provisions. Getting into an instance will be as simple as waiting in a queue or forming up a party by hand.


While this is just the very basics of what it would take to make the game work all of these ideas together would be my true dream game. Though it is very obvious this is a mass of ideas lifted from other games and condensed into one, why fix what isn't broken?

A man can dream can't he?
#OpinionEditorial
Login to vote this up!

I am JuiceMcNasty or you can just call me Gio/Giovanni, yes it is true I was named after the infamous leader of Team Rocket -- well not quite, more of an awesome coincidence!

Don't You Ever Forget That McNasty Gets Down


Feel free to add me on Steam or PSN just shoot me a message that mentions Dtoid -- I am almost never on Live anymore so Steam and PSN are the easiest ways to get in touch with me!