5:01 AM on 04.05.2012 (server time)    0
The above quote is one of my favourite lines from Bulletstorm, which I picked up a few days ago on Steam when it was only $7.99. I had previously played the demo of the game on Xbox when it was first released. I kind of enjoyed it, but I couldn't see myself playing the full game. I imagined that I'd get bored after too long. I was wrong. 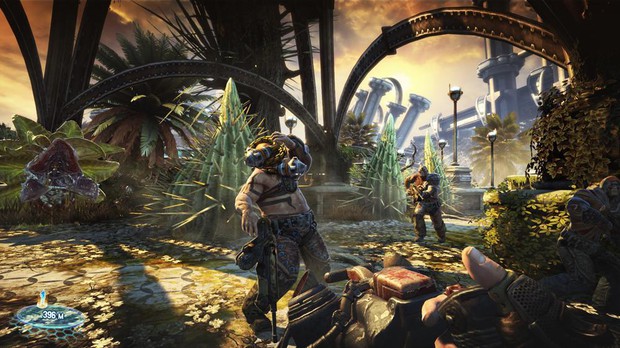 First of all, the graphics in this game are gorgeous and the art design is fantastic. For a ridiculous game about killing freaks and mutants in over-the-top fashion, People Can Fly definitely didn't scrimp on the visual element. The planet the game is set on is a beautifully realised sci-fi wonderland, and everywhere you look there is an amazing view to behold. But enough of that shit, what about the shooting the people in the balls and then kicking them into a giant cactus? Yes, this game has that. There is a lot of kicking. Always with the kicking. The character you play, Grayson Hunt, has a seemingly magical giant boot that propels people skyward and slows down time. Of course, the slowing down time part is never explained. It doesn't need to be in this game. This is a game where you can pull a mutant towards you with a electric leash, kick an explosive barrel towards another freak, and the then shoot an explosive bola which wraps around the first mutant's neck after which you can kick him into a crowd of his friends and then detonate. Glorious.

As most people will know the main point of difference in this FPS is its "Skill Shots". These are basically all the different and inventive ways you can kill people in the game, and you score points depending on which Skill Shots you use. My favourite is "Sausage Fest", which is when you kick a hotdog stand into a crowd and it explodes. Yes, "Sausage Fest". The names for the Skill Shots can be quite amusing, and it's worthwhile taking a look through your stats to see which ones you have achieved.

It's obvious while playing Bulletstorm that the developers had their tongues planted firmly in their cheeks when they put it together. The characters are all hyper-stylised stereotypes, and the voice actors seem to have fun spouting their often hilarious dialogue. I honestly have laughed out loud several times while playing the game, some of the lines are just so ridiculous.

I'm about half way through the game so far, and my fear of growing bored has proven unfounded. I'm really enjoying Bulletstorm, and I'm looking forward to discovering more inventive ways to slaughter people in the days ahead.
#ShareonCommunityBlogs
Login to vote this up!