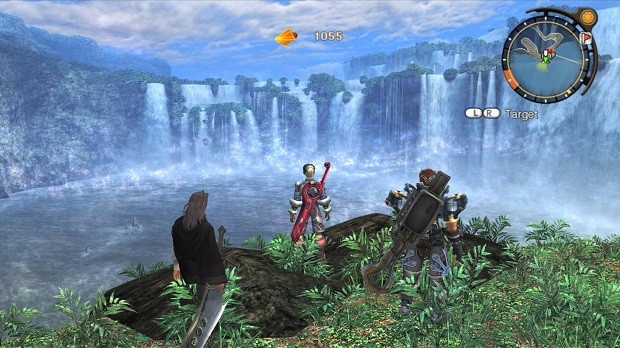 The storyline, too, moves in all sorts of bonkers directions (for starters, the entire gameworld exists over the bodies of two petrified titans) but almost never feels padded in the way that so blighted Skyward Sword, a game roughly a third as long. Plot twists arrive with mischievous frequency, and while this makes proceedings far too circuitous to properly keep track of by the end, all the pomp (and silly jokes, especially between the party) is infectiously compelling.

There's a constant sense of forward motion, with new locations opened up every few hours - ignoring the side-quests, ill-advised in practice - many of them foreshadowed early on and each with a distinct colour palette and visual identity. While the game is technically a little clunky, with intermittent framerate drops in vast areas and crowded combat, and considerable fade-in, few titles demonstrate and embrace the importance of art direction in such a vibrant, evocative way. The starry night sky above the Bionis leg doesn't tax the hardware much, but by golly is it breathtaking.

That sensation is Xenoblade all over. There are plenty of little problems to pick at and wrinkles in need of ironing out, but in the end, the grandeur and ambition will hold your heart even while your fingers are struggling to keep up. Considering the game's size, Monolith deserve unreserved credit for the absence of any major bugs, putting to shame companies like Obsidian and Bethesda who ship games bursting with problems, content in the knowledge of being able to patch them later (for players with online connections, anyway) and demanding forgiveness because of the scope of their creations.

Xenoblade invalidates that excuse. It is an exquisite achievement in game design, fiercely loyal to RPG tradition whilst refining it in clever, helpful ways. If its ambition sometimes exceeds the execution, you can't help but admire it for getting as much right as it does, a perfect example of an experience all the more engaging for its flaws. The game may have taken its time reaching American shores, and this review delayed by over half a year to accommodate its insane scale, but everyone lucky enough to be preparing for their first steps onto the Bionis are about to have that wait paid back in spades. [ 8 ]

If you enjoyed this, you can subject yourself to more such ramblings on my Facebook and Twitter accounts! Don't forget Flixist either: we have pterodactyls there and were recently taken over by, ahh, Jeff Goldblum. Such shenanigans! Also, these '10 Things About Me' posts are brilliant, I'll try and find time to do one of my own sometime soon.
Login to vote this up!