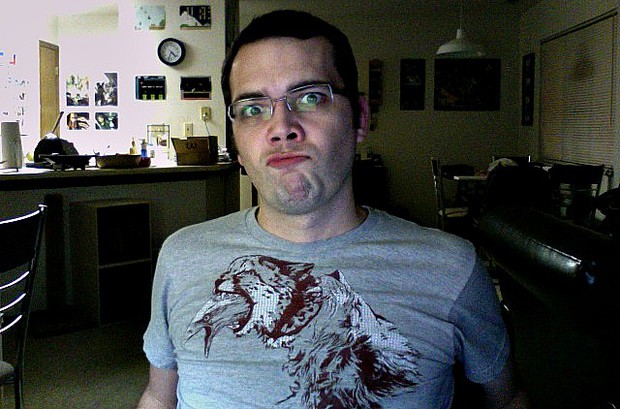 1) I used to consider myself an artist

- As a child, I drew constantly. I loved creating characters and drawing out plans for silly inventions. My mother (who is a talented artist herself) and I would play different drawing games together. My favorite was one in which we set up a wall between our two pads of paper and drew a basic shape for a head. We would then alternately tell each other to add different facial features, like pointy ears or three eyes, until we decided we could add no more. The best part was revealing our drawings to each other and seeing how vastly different they turned out even though we had the same instructions. I was actually describing Draw Something to her the other day and she reminded me of a game we used to play with Mario Paint that was basically the same thing! Crazy. Later, in my high school years, I would always carry a sketchbook around with me and doodle whatever was clogging up my idiot teenaged mind. I still have it and, yes, it�s incredibly embarrassing. Lots of references to the Red Hot Chili Peppers, Beastie Boys and Pearl Jam.

2) I didn�t go to my high school graduation

- A couple days before graduation, I left a friend�s house and was making my way home. The battery had died in my car recently and knocked all my radio presets out of whack so, (stupidly) I chose to fiddle with them while driving. I remember being slightly distracted because the time (10:57) was similar to the station I was trying to set (105.7) and I took my eyes off the road for longer than I should have. I ran a red light and crashed my �88 Nova hatchback into a minivan that was crossing in front of me. I wasn�t wearing my seatbelt and smashed the windshield with my face/head and put my right knee through the dashboard. I strangely didn�t feel any pain and was more concerned with the safety of the other vehicle. When I stepped out of my car to check on them, my leg gave out and I decided it�d be best to sit down. A woman who was waiting at the stoplight hopped out of her car and ran over with some napkins to soak up the large amount of blood. I asked her to check on the other vehicle and she said the family (Jesus Christ, a family?) was all okay. Long story short, I got 77 stitches, a permanent scar on my forehead, a left eyebrow that grows funny and I have a mild panic attack when I go through intersections. Needless to say, I always wear my seatbelt now and only mess with my stereo when I�ve reached a full stop.

3) I have incredibly boring dreams

- If you have interesting dreams, I envy you. My girlfriend tells me about dreams where she�s wandering through an underwater cathedral or being chased by flesh eating creatures and violently fending them off with blunt weapons. I have dreams where I wake up late and I�m rushing to get ready. I had a dream once in which I forgot to put pants on and I was embarrassed when someone pointed it out. I had a dream once where I couldn�t run and it was annoying. I had a dream where I was at work, doing work related things but I kept catching my co-worker lying on the counter. I�d tell him to stop but a few minutes later he�d be back up there, taking a nap or just relaxing. It dawned on me - it was Sunday but I wasn�t supposed to be there. I had made the schedule recently and I clearly remember giving myself Sunday off. I tried to backtrack to how I�d gotten to work that day but couldn�t piece it together fully. In a somewhat lucid state, I decided to test my theory. I ran towards the door, kicked it open and took flight! Hundreds of feet in the air, I shouted something like, �YEAH!!!� and woke myself up. My one chance at having an awesome dream...ruined.

- I can�t even explain why. I don�t necessarily mind talking to people or even a small group. However, if I�m thrust behind a podium or asked to stand up and speak to the room, I tense up. My throat tightens and I do everything in my power to keep what I say as short as possible. It�s positively horrifying. I went on a Habitat for Humanity trip with my friend�s church group once and had a great time. What wasn�t explained to me beforehand was that after we came back, we�d have to speak in front of the entire congregation and share stories of our experiences. All I remember is my eyes watering up and my voice croaking through whatever I blurted out. I walked away totally ashamed. All I know is I�ll never get into politics and I sure as hell won�t become a motivational speaker anytime soon.

5) I feel more comfortable around animals than people

- I love animals and have had pets around all my life. As a child, I had a Chow named Cricket that I loved intensely. She was incredibly gentle and almost always peaceful but would occasionally bust out with this playful side that always made me laugh. She also farted a lot but I forgave her for that. When she was about 8, she fell ill and had to be put down within days of us noticing anything was wrong. I had never experienced such a painful loss and I cried more than I thought I would. She still holds a special place in my heart and I find myself comparing other dogs to her. She�s still the best, by a long shot.

6) I fucking hate talking on the phone

- I don�t feel like I really have to elaborate on this one much but seriously - it�s the worst. Phone calls are always an annoyance no matter what else is going on. I could be watching TV, playing a game, reading a magazine, messing around on the Internet, it doesn�t matter - a phone call can ruin any situation. My disdain most likely stems from having to answer the phone and answer silly questions all day at work. So if you call me at home, I apologize if I sound really annoyed. I am.

7) I�m not even slightly religious

- I was describing my personal belief system to a friend one day and she told me that I sounded like a Secular Humanist. The term wasn�t familiar to me so I researched it a little and, to my surprise, I was. This little blurb sums the idea up pretty well: �Humanism is a democratic and ethical life stance, which affirms that human beings have the right and responsibility to give meaning and shape to their own lives. It stands for the building of a more humane society through an ethic based on human and other natural values in the spirit of reason and free inquiry through human capabilities. It is not theistic, and it does not accept supernatural views of reality.� It�s basically the concept of being a decent person for the good of those around you, not because you�re afraid you�ll be punished after you die. It�s not nearly as vague as agnosticism and it�s a lovely alternative to atheism.

8) I had my nipple pierced once

- Peer pressure is a funny thing, kids. I don�t know what I hoped to accomplish by having a piece of metal dangling from a flap of sensitive skin but I did it. It never fully healed and I removed it a couple months later. All I have to show for my dumb mistake is a nipple riddled with scar tissue and a serious fear of titty twisters. Lately I�ve been thinking about getting a tattoo but I�ve decided to sit on the idea for a couple more years. No need to rush into an even more permanent mistake.

- I�m 6�3�� (maybe 6�4�� if I stand up straight) and I�ve been a skinny kid my whole life. I always ate a lot and, though I played a few sports in high school, was never especially active or health conscious. I just figured I was blessed with amazing metabolism and it would always be that way. Well, age has finally caught up with me. After years and years of hovering between the 165 - 180 lbs range, I�ve finally coasted past the 200 mark. I�m not overweight and I�m surely not making light of anyone else�s trouble with weight control. It�s just strange for me to look down and see a few rolls, that�s all. My father told me that his breasts jiggle when he brushes his teeth so perhaps I�ll take up jogging or something if I creep up to 220.

10) I�ve never left the confines of the United States

- My girlfriend and I travel quite a bit. We�ve been to Chicago, Denver, San Francisco, San Diego, Seattle and a few other places. We take tons of pictures and try to check out as many museums, parks and restaurants as possible during our stay. Having lived in Saint Louis, MO my entire life, I can confirm that just about everywhere is more interesting than here. One thing I�d love to do is see some other parts of the world. Canada and Mexico both seem nice but I�m thinking about crossing an ocean here. Australia and New Zealand look incredible, as do many cities in Europe. Even though we have no solid plans as of yet, the prospect alone excites me greatly. I think it�s high time I open my eyes a bit and explore this giant, beautiful sphere we live on.

Wow, I'm kind of surprised with how difficult this was to write! It felt good though and I hope some of you do the same. I'd love to get to know you better. :)
Login to vote this up!