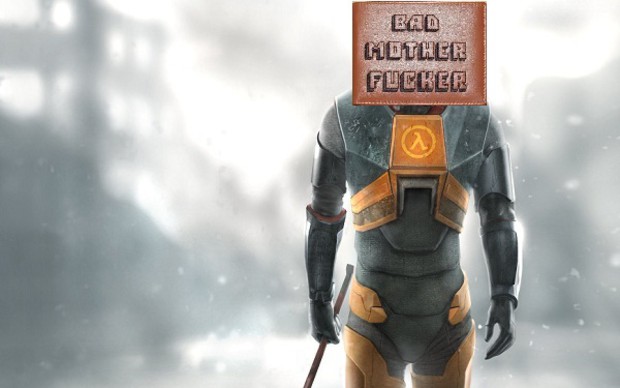 I literally just wrote down my two favorite things, and I'm absolutely giddy that there may be a correlation between the two. According to one tiny detail on Tarantino's IMDB Bio the quirky director has a deep love for Valve's revered series, Half-Life, and has considered making a film adaption of the game. Let me state again, that the following is pure speculation. As much as I would love this to happen, there is no confirmation that it will, but I want to think how exactly it could be done.

I am a huge fan of both the Half-Life Series and Quentin Tarantino's films. I carry my Bad Mother Fucker wallet with pride and have played each of the games numerous times, digging for details and finding new things each playthrough. As much as I would love this fission of ideas to come together, I can't help but be apprehensive about it to a degree. I'm mostly concerned about the two different tones presented. The spirit of revolution and near-future sci-fi are for the most part quite serious, whereas Tarantino is at his best when he takes violent subject matter and gives it a cartooney twist; like he did with Kill Bill (or what could have been done with Inglorious Basterds). I do trust Tarantino to take the subject matter appropriately, but I know his efforts are best spent dealing with the absurd. Another thing is that Gordon Freeman is a character that must never speak. He is the shell for the player to inhabit and act out as the hero of mankind's revolt against our alien oppressors. So how could Tarantino go about a Half-Life film without Gordon Freeman and a completely different tone? Simple: new location.

Humanity doesn't surrender unconditionally to alien forces in one place while the rest of the world carries on with their lives as normal. Earth surrendered entirely after the 7 Hour War. Now in control, the Combine displaced citizens all around the world, which explains why Half Life 2 takes somewhere in Eastern Europe. That single detail there is enough to allow for almost anything to happen, and I know exactly where it should.- Neo-Tokyo. Okay, maybe not exactly Tokyo, but some sort of post-futurist Asian city. Perhaps some sort of blend between Blade Runner and The Animatrix. This backdrop would provide Tarantino ground he is very comfortable working in, as well as provide an interesting take on the aesthetics of the Half Life universe.

As for characters, one could use nearly anyone to fill the cast thanks to the theme of displacement. Did all the Black Mesa scientists end up in the former Soviet Union, or were they divided even more? Are there other heroes of people leading revolutions elsewhere? What atrocities are the Combine doing to humanity elsewhere? Personally I'd like to see Tarantino take another stab at the Guerrilla insurgents idea but this time focusing more on the revolutionaries rather than the girl who runs the tea shop next door. Perhaps they too got wind of Freeman's exploits across the world and took up crowbars as a symbol of the revolution. This could also allow for a delve into the depth of the revolution in general. How far spread is it? Is the lambda a global symbol now? What other heroes were there in this revolt? Speculating speculation!

These ideas would allow Tarantino to run wild and make an incredibly stylized, violent film set in one of the coolest video game locations conceived. Would it be a single narrative? A collection of short films? Animated sequences, or perhaps entirely animated? The possibilities are quite endless with a man of his mind. Needless to say this would be a project I would love to see come to a reality one day.

Until then, we'll just have to make do with the incredibly high quality fan films being made today. If you haven't seen them, I highly recommend you do so. Beyond Black Mesa is by far one of the most ambitious projects I have seen in quite some time, and Half Life: Origins is well worth a viewing as well.
#ShareonCommunityBlogs
Login to vote this up!