6:10 PM on 03.21.2012 (server time)    0
Let me start off by saying I'm not equating the hordes of fanboys that may have initiated a "correction" to Mass Effect 3's ending to evil in this case. While I do consider their ilk, as a whole, to be some sort of internet-bound omega bitch force, they're merely a catalyst for something that may have much worse ripples to come down the line. Sure, there were a lot of people who were upset by ME3's closing options, and it would appear they may have secured something "better" in the reasonably near future. However, this could have a severely negative impact on in-game storytelling on the whole as time wears on. 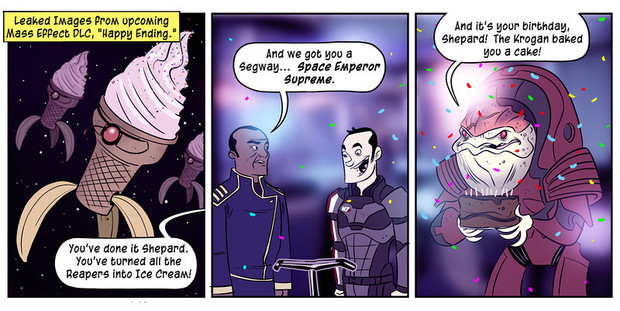 The optimist in me is hoping beyond hope that this is an isolated incident, and once fans are presented with an alternate ending or content further explaining the existing one, this whole thing will blow over and be forgotten. At the same time, we live in a world where the frequently malfunctioning and generally irritating trend of online passes continues to persist, and new and unique games already get buried under shovelware and retreads thanks to poor launch timing and lack of advertising.

Let us hope you needy brats haven't ruined things for the rest of us.

And that I'm done talking about this game, because it's really starting to hurt my brain.

Strip is from Penny Arcade. Given that they are hilarious, and they're responsible for PAX, which in turn is pretty much responsible for Destructoid, you should probably read their stuff.
#ShareonCommunityBlogs
Login to vote this up!