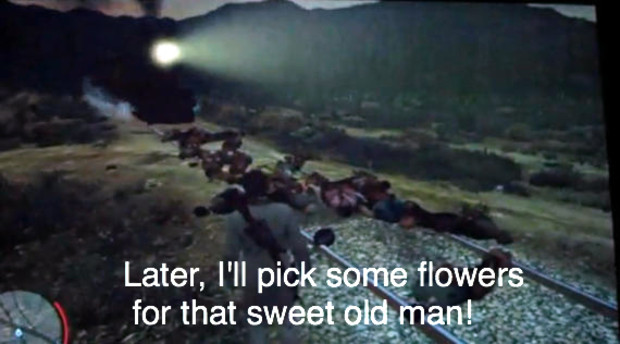 As I milled it over, I realized that the disappointment I felt with Red Dead Redemption may not have been disappointment at all. It was more of a half fear and half excitement mutant hybrid. The fear was from the notion that the kind of videogames that I grew up on, games that were technically limited and leaned on narrative to turn rough polygons into emotional experiences, were being replaced by a new beast. A beast who's depth is born of its technical capacity. A beast who can create a compelling experience in the absence of a compelling narrative. The excitement was from the notion that Rockstar had touched on a new way to conceive of games. After all, the living world of Red Dead is something that reached universal appeal, making Marston a household name amongst nerds and their adolescent nephews alike. After Red Dead, I can begin to imagine a future where the videogames we buy become synonymous with the sprawling gameworlds contained within; Where the "open-worlds" that are slowly taking over our AAA market, become so dynamic and nearly-living, that the need to shoehorn in a singular narrative will be replaced by the freedom to seed any story the player can imagine. As the 12 year old niece of a friend put it, Red Dead Redemption is a place where "I can ride my horse around and nobody bothers me." And maybe that's all it has to be.
#OpinionEditorial
Login to vote this up!