What made you choose Destructoid as a community to be a part of?

I'd been reading Destructoid for a few months after hearing of it from somebody in the comments on a 1Up.com news item, but what made me actually sign up and leave all other game sites behind was this article on the 2007 Tokyo Game Show. I remember there being more images in the comments at the time, and I just knew I wanted to be a part of that kind of fun. The fact that there was an "edge" coupled with a sense of humour throughout both the community and the staff convinced me that this was a site I actually wanted to join and become a part of, not just check in on every once in a while.

Back on the original Xbox my initial subscription to Xbox Live was ending so I decided to start a new gamertag rather than keep my existing one, since nobody seemed capable of pronouncing it (AutonomousAxiom). So I wanted something an idiot could say, and also something "fun". The thought of a zombified platypus came to my mind and struck me as one of the least intimidating zombies a person could come across, so I went with it. I've had too many avatars to number over in the Forums, but on the main page/cblogs it's always been the same. It's something I drew well before joining Dtoid, one of if not the first zombie platypus I drew.

That was from before I settled on my current color scheme, which pretty much swaps the hand/bill color with the fur color, and keeps the tail solid with the fur (as it should be).

Really hard question. Possibly Super Mario RPG: The Legend of the Seven Stars or maybe The Legend of Zelda: Link's Awakening. Followed closely by about a dozen more games I'd like to list right on the heels of those two.

This is an even tougher call than the favorite game question. I'll go with Bowser, King of the Koopas, but there are many more characters I dig.

You do custom avatars for people. What's the process? Who do you decide to make them for and how do you go about designing them?

I'm gonna break this one up a bit. First, I never expect anybody to use the pictures I do as their avatars. If they dig 'em enough to use them, that's cool, but it's not like a thing. I just honestly like making things for people. It gives me motivation to keep at drawing, so it's kind of from a selfish place as well, but yeah.

My process is pretty archaic, since I'm pretty out of touch and don't know what I'm doing, just picking stuff up as I go along. I draw stuff out using a mechanical pencil in my sketch pad, then ink over it and erase the extra pencil scribbles. Then I scan it into my laptop using my decade old HP all-in-one printer. From there I use paint.net (FREE! (LEGALLY!!)) to delete all of the white space, then I darken the lines, blur and sharpen it all to thicken and smooth my lines, then I add layers and color. All using the touchpad "mouse" built into my crappy laptop. I sooooo know what I'm doing, you guys. ;)

As for who I decide to make pictures for, that really depends on if they fall into a given project I'm doing or are just random. A couple years ago in the Forums I did a bunch of "Beastoid" pics, which was basically just me drawing the bodies of mythological creatures onto photos of people only using paint.net. My big pet project is "Title Shots", which I put more real effort into and go through all the convoluted steps I listed above. For that it's just me drawing interpretations of different users' custom Forum titles. It started as an excuse for me to draw my buddy Aurain's title, "Bearjection!" and grew from there and now I've done fifty-four of them as of right now, not counting certain jokey alternates. There's no rhyme or reason to whose title I do next, just if an idea strikes me I do it. For instance, for one guy I've had an idea in my head for months but every time I try to draw it out it doesn't live up to my own expectations, so it's yet to be finished. I'm not great, but I have standards. Then there's the random pics I've drawn for certain people, and shoops. We used to do a lot more shoops down there in the Forums, and those are always a good time.

Oh yeah, recently I also drew cartoon versions of fifteen of our crotches, because Sam Gobbldigook had a dream in which I did so.

It's kind of a long story.

Everybody I've already hugged from Dtoid, and probably a dozen or more folks that I've yet to.

I'd go for an out of body experience and punch myself right in the face as hard as possible. I have it coming.

Funny and happy. I could list a few of my dream jobs from when I was a kid, because they still apply, but if I can make other people feel good and feel good myself that's all I want.

Now that I�ve grown I can�

Leave my NES on all night without putting a book in front of it so my parents don't see the red light and turn it off while I sleep.

What game this year are you most excited about?

Seriously, that's the only game I really care about this year, and it's already sitting in my 360 as I type this. My god...You just found out that your childhood friend slept with your sister...WHAT DO YOU DO!!!

Depends on the friend. If it's Justin I'd slap him on the back, welcome him to the family and ask him where the hell he's been. We should've stayed in contact, man!

If it's Nathaniel I'd tell him I'm surprised because I always assumed he'd be into cock by now.

If it's Jack I'd tell him to stay the hell away from my sister because that dude is a giant fuck up.

If it's Jared I'd tell him to stay the hell away from my sister because DUDE, you're married with kids, bro!

I'd hop in my car and drive. I don't even know where, East or West, but I'd just start driving. Along the way I'd be making phone calls to the people that matter, and in between calls I'd be blaring my iPod.

What is your most prized possession? (Family and Loved ones don�t count)

I thought long and hard about this, but I'm going to say it's my Phantomato of the Opera toy from when I was a kid. Ever since I rediscovered it early last year he's kind of become my mascot. I love it. 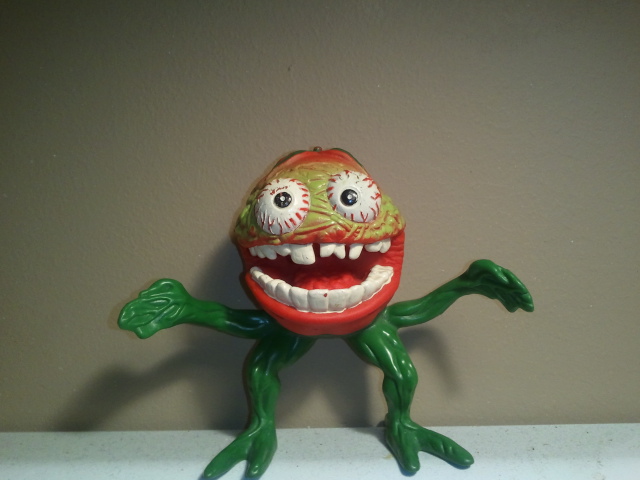 Why do you believe you deserve to be Ms. America?

Because it's about time an overweight man got to be crowned Ms. America. For too long my demographic has sat idly by while the title has been given to society's definition of "beauty". We can be purdy too, damn it!

While we're at it, I'd like to be Miss Teen America instead. Who cares that I'm twenty-seven? I'm still twenty at heart, and that's close enough to teenaged!!

Why so fragmented and cliquey? I know it's kinda sorta always been that way, but we really seem to get more and more divided as time goes on. I have little room to talk since I'm one of those mean Forums kids, but there should be more of a sense of community in our community. It comes out just fine at gatherings and meet-ups, PAXs and MAGfests, but on the site we're so split up between main page, Forums, the video kids, multiple skype groups, irc (does anybody actually use that still?) and on and on. I dunno, some people walk between multiple facets without a problem (Stevil), but I just feel like there's a dwindling sense of real site-wide "community".

So, Community, why don't we try to work towards that?

(Law's Notes: I still got it baby)
Login to vote this up!