Holy f**k-tits, why did I take so long to get around to playing Cave Story

10:12 PM on 03.09.2012 (server time)    0
Since I'm still trying to figure out just what the hell these feelings I've walked away from Mass Effect 3 with are, it'll be a short blog this week. I bought the last Humble Indie Bundle some time ago, but somehow just noticed the little entry called "Cave Story+" sitting on my Steam list a short couple of days ago. I'd always meant to play it, having read glowing reviews of the WiiWare version upon its release, but it always slid back into that huge indie-game-pool of "oh I'll get around to it some time." Oh, man, do I regret putting it there.

The "story" half of Cave Story had an intriguing way of sneaking up on me. I begin in a room called "Start Point," which leads me into another room called "First Cave." Proceeding a short distance downward, I pass a few obstacles, obtain a weapon and then go back up. I interpret this as a conventional but well-executed "natural" tutorial, familiarizing and acclimating me with game's rules and structure; I thus expect the game's draw and progression to be Metroidvania-like, with stages labeled and ordered as "caves," and some light, harmless plot sprinkled across the surface. Oh, cute bunny-people - yeah, that seems about right. I assume the increasing volume of words is merely some oddly-paced exposition.

Then somebody drops the word "killed," and things start to get dark.

Being a huge sucker for games with good stories and presentation, I can't say I'm surprised at how quickly and easily Cave Story drew me in, as I booted it up having read about how I'd receive just that - but there's something about a game that eschews those "surprises" and radical genre shake-ups for rock-solid design and a compelling yarn that flips on all kinds of otherwise rusty happy-switches in my mind. There's a comforting feeling about slotting into this kind of title; one that has its unique little moments but whose greatest strengths lie in taking familiar concepts and executing them to perfection. 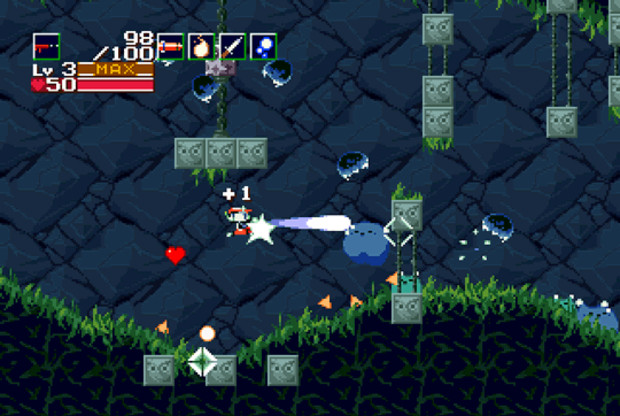