With the release of Street Fighter IV, members of the Destructoid Forums were able to cultivate a small community of competitive gamers in the Street Fighter IV thread. FNF events, Dtoid-only Ranking Battles and small tournaments created a community over XBL with other Dtoiders and helped everyone not only get better at the game, but allowed for a consistent player base to interact with.

3 years have passed and a lot was accomplished in that time period; many tournaments were held, we started our very own fighting game podcast, Podsumaki, and many of the players involved were able to defeat some of the best players in the nation for Super/Vanilla Street Fighter IV (Cataract being the Adon who defeats Justin in the now infamous 'Adon is the worst character in the game' video, FatGuru placing top 8 at Devastation a couple years back, and myself being able to defeat some well known names in the Fighting Game Community), showing improvement and knowledge of the game.

Unfortunately, lack of interest, real life, and various other issues caused this community to whittle down over time and eventually saw activity drop to almost nothing.

This is unfortunate, not only because we have lost the culture which helped each player within our community get better and grow as a group, but because this is one of the most important times in the fighting game genre's history, as a resurgence has brought about various tournaments, streaming channels, sponsorships and recognition as a legitimate E-Sport with the Evolution series and SBO (Super Battle Opera) now international events drawing in players and sponsors from around the world.

With the release of recent fighting games Soul Calibur V, King of Fighters XIII, Street Fighter x Tekken and the upcoming Skullgirls, I'd like to recreate the community we started with Street Fighter IV.

The guys who are left from that community on the forums are people who play multiple fighting games and have the experience and know how to go about learning, analyzing and getting good at fighters. If you have even a mild interest in improving in or trying to learn some of the fighting games I've mentioned, stop by our usual hang out spot in what we call The SupaThread or hit me up on Xbox Live (gamertag in right panel).


I'll leave you with a picture of an old tournament bracket from a couple years back. 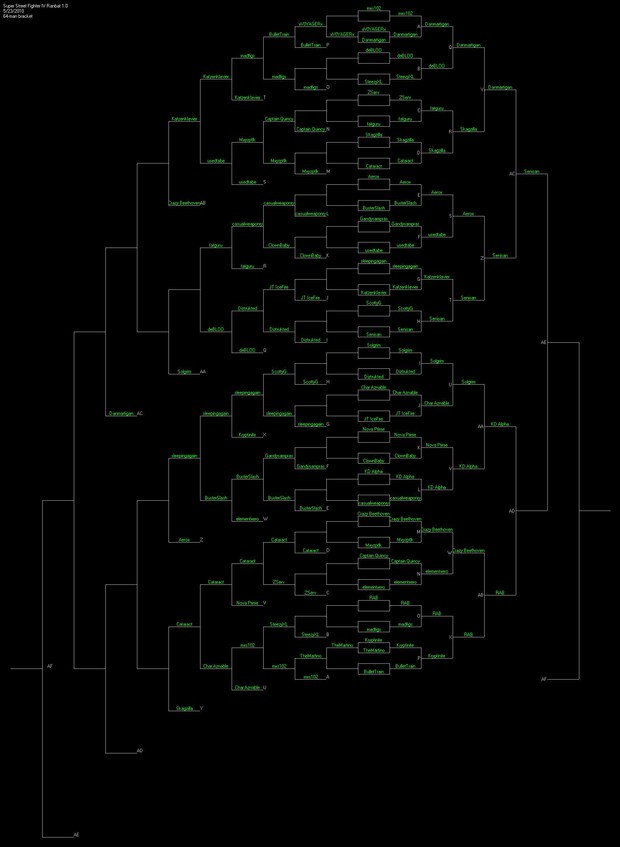