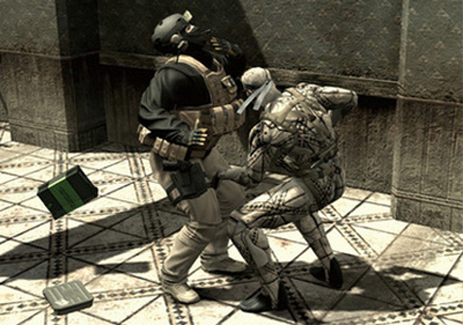 Hey All! In case you haven't noticed, I am a huge fan of the Metal Gear Series. Pretty much every damn thing about it is awesome to me such as the game play, characters and stories, boss battles, etc. Metal Gear has been going strong for 25 years and still not showing signs of slowing down, well maybe there are some things about the series that even I think needs to be fixed. So I shall be conducting an little analysis on some problems plaguing the franchise so here go.

Not so bright guards have been around since the original Metal Gear, back then it was understandable, today in 2012, they still show flaws.while each game the enemy does get smarter, It still feels like they don't have human like senses. Flaws like how they can't see far and thinking it was "nothing", or hearing a loud noise yet they still cant hear it, It's really the field of vision that rubs me the wrong way with the guards in MGS. I think MGS4 was the game that came the closest to making the guards even at times have super human like senses, how they actually can see far off, hearing a little can get knocked over and they respond, that's what I want to see more of. Also one personal quip I have, If you were to tranquilize a guard and they'd wake up later, I don't think they would just get back to doing there usual thing, If I were them I'd worry about how I got knocked out and have a tranq dart in my neck. If anything they should commence something like caution mode.

The MGS franchise is notorious for having very,very,very lengthy cutscenes. Now don't get me wrong, I love the cutscenes in the MGS games actually, the deaths of bosses in MGS, the mindfuck ending in MGS2, the confrontation with The Boss in MGS3, and the grand finale in MGS4, many of the story elements are quite charming in their own way and really memorable. But on the other hand, you've got the hour long cutscenes where you hear nothing but 1 character not shutting the fuck up and giving you very abysmal advice that a 3 year old can even understand. once again MGS4 does something right by having the codec conversations be done during game play (ironically the one MGS game where the codec is useless yet looks it's best). You also got Miller in Peace Walker for as bad ass as he is he cannot shut the hell up. tutorial this and Fulton recovery that. theres always one character in each game that sucks up a good amount of time like rose from mgs2 or meryl from mgs4. I dunno but now that the mgs story is kind of finished I hope to see less cutscenes and dumb advice in the future and only get straight to the important parts.

This one I'm kind of light on but I can sometimes see as problem. MGS games can have hard times trying to get the controls for each console/handheld down. The is popping up more with it's more recent outings like Peace Walker and Snake Eater 3D.You just need that second analog to maintain your camera and use the real buttons for much more comfortable playing instead of relying on a dpad (especially when the dpad and analog is on the same side of the handheld). It's also kind of hard to play the twin snakes on a nintendo gamecube controller with that awkward Z button and having to press the pause and A button at the same time just to use the codec. But I think this is a problem that can overcome itself now that 3DS and Vita are getting 2 analog sticks. (especially when the 2nd analog comes to the inevitable 3DS rerelease).

4) Over Reliance on Camouflage/Lack of Traditional Stealth 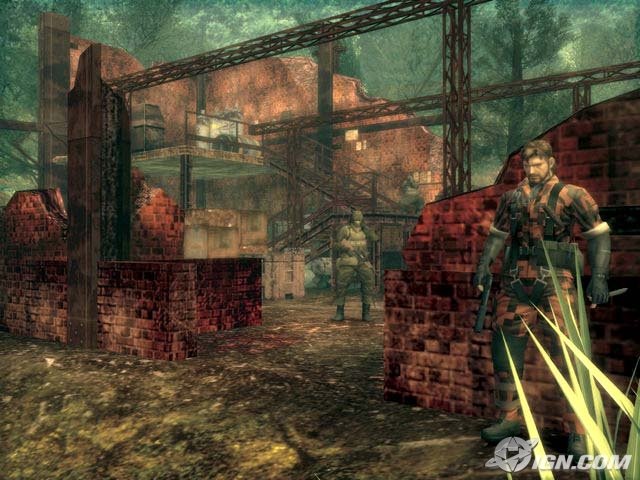 Now When I first saw the camouflage system introduced in MGS3 go to use for the first time, I was excited, I loved the idea of blending in with the environment. MGS4 took it a step further by making the Octocamo do automatic camouflage without the need to change camo. I'd go as far as to say the Octocamo was THE main feature in the game and the single greatest gaming design idea in a long time. But something was missing. What about sneaking the old fashion way? Traditional stealth required more strategy and thinking like hiding behind a crate or under a truck, hanging off a ledge or making noise to draw attention. Maybe go back to disguising yourself as an enemy soldier. Hell the cardboard box is pretty much useless now that you've got camouflage. I think there needs to be more situations that revolve quick thinking and not require that you use camouflage to practically turn invisible to the naked eye. One more thing, wouldn't it be more realistic if you change camouflage during times where it's safe instead of manually doing it during an alert phase or a firefight?

Along with the Camouflage system debuted the CQC system. CQC is an easier way of disarming an enemy soldier. you can interrogate them, choke them, slit their throats,flip them over, search them for items, use as hostages during alert phases. CQC I am A Okay with. But then CQC was starting to become too overpowered to the point when you play Peace Walker you can practically flip over every guard nearby no matter how many there are and instantly KO them. a simple solution, just downplay the CQC in future games.

As you know by now, the MGS Saga has kinda concluded with MGS4. The Main Villain is dead, the Patriots are overthrown, all questions have been answered and a LOT of people have died (okay, okay not a LOT). So.....why are we still in this story arc. I know Peace Walker and maybe Revengaence could be used to fill in a few cracks but Why don't we just start anew? If things were my way, I would either take the series into the far off future where machines rule and new characters and new story elements are put to use or I would do a Re imagining where I would use some of the same characters and themes and put them into a new universe like snake, Big Boss and Ocelot. It seems like we dwindled in this story arc for to long, the only thing left to expect would be MSX remakes.

So those were my 2 cents on how I would treat the franchises problems. But just to note, some of theses are really just nitpicks, nothing game breaking or anything. So, how would you do things differently, do you agree/disagree with my choices?
Login to vote this up!