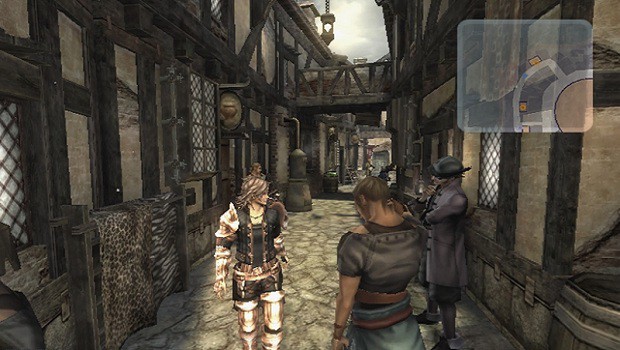 Framerate problems might have been slightly more forgivable were the game to give off the impression of taxing the console to any degree, but while sometimes graced by agreeable images (Zael and Lisa watching a display of shooting stars on a purple night sky), environments are small and texturing on enemies and scenery frequently blurry. Brown and grey colour schemes dominate, combining with the low-quality character models to make Lazulis Island a particularly dreary hub to navigate (the lack of signposting and worthwhile reward for sidequests, meanwhile, only encourages them to be ignored).

A further quirk is how, despite the game's muddy visual quality, it seems to have been designed for large televisions: on smaller screens, the icons indicating which character is equipped with what weapon or armour is almost indistinguishable, with no text offered for assistance. Certain bosses, meanwhile, require players to note small details, such as glowing red eyes, as a guide to success. The shambolic graphics make this a task requiring superhuman observational skills, leaving the player relying on pot luck or the purchase of a larger television to progress. Even for the Wii, that's an expensive peripheral too far.

The game steadily improves as the player adapts to its issues: battles become a tad more challenging and require greater tactical consideration, while the twenty hour length keeps the storytelling focused and accessible for those not able or willing to commit to a Xenoblade-esque eighty hour extravaganza. The lead characters are an engaging bunch, with their regional British accents an easy fit for the rural trappings of the fantasy genre (not a trace of sci-fi on show here) and the excellent localisation never shy of deploying an amusing colloquialism or two. Legendary composer Nobuo Uematsu's score only produces a handful of memorable tracks, but is of consistently solid quality. A pity the same cannot be said for the game as a whole, its most exciting ideas let down by uneven execution. The Last Story is far from a write-off, offering enough potential to hope for an improved and title-defying second instalment, but as a first chapter it is a bit of a bungle. [ 5 ]
Login to vote this up!