2:52 AM on 02.28.2012 (server time)    0
More Dark Souls! Since it is almost the only thing I've been playing for weeks, I guess it was only inevitable that I write another one of these, huh? If you've been watching my live stream at all, you'd have seen me crafting this build, which has ended up being somewhat effective so far. I also mentioned it on the most recent episode of the Secret Moon Base podcast. I'd like to tell you all about it. Warning: this post is serious Dark Souls nerdage. There shouldn't be any spoilers, except the names of equipment you might not have seen.

This is a flavor of dexterity/faith rapier build. I guess the basics of this build are pretty well known by experienced Dark Souls players at this point, but I've imposed certain restrictions upon myself to try to differentiate from the "optimal" one. Despite these restrictions, I made Darkmoon Blade +3 (80 PvP kills) in about 3 days with probably a > 70% K/D spread, so it's vastly exceeded my expectations.

For any not-Dark Souls fanatics, I'll briefly explain dex/faith builds. Thrusting swords like rapiers scale their damage well according to the dexterity stat, so I'm using them as my primary weapons. With high faith, you get access to certain temporary weapon enchantments that add huge amounts of damage. Put these together and you have a mean combination. 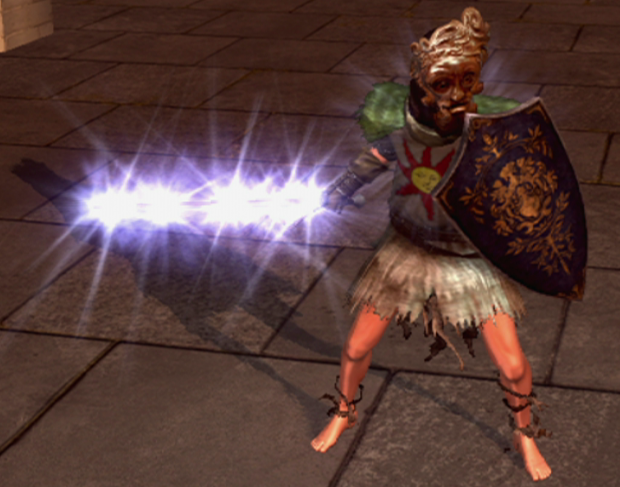 What does this abomination of a character look like? Well, in a word, UGLY. By the way, that's a SHE.

Opponents with Eagle Shield who wait until the weapon enchants run out. You can switch to the shotel to try to deal with them, but I've had mixed success. This is probably my inexperience showing.

Opponents who rush. I don't call this cheap; it's their prerogative to exploit a weakness in my build. So it can be dicey getting the buff on my weapon in time, especially in the Kiln or forest.

Outnumbered fights. This build works best targeting a single opponent. Part of that is due to the narrow arc of the rapier. Arc? The arc is nonexistent! It's a poke directly in front of you! A Claymore this is not.

In 2v1 and 3v1 fights, your best bet is to look for openings in either player and try to eliminate him quickly, so you can go back to defending your back against the remaining ones. Wrath of the Gods sometimes helps here if they all get in too close. Still, I have lost far more of these than I've won. In these cases I will not put on Power Within, because the fight is bound to be too long.

Bleed damage. Turtling up like sometimes happens in these fights is no good against an opponent inflicting bleed damage. I need to dodge more in these cases, I suppose.

So yeah, that's my build. It took about 60 hours to get to get to the conventional PvP level of 120 and get all my equipment in order, but I wasn't going at a crazy pace.

People in the live stream chat sometimes comment on my self-imposed restrictions. I have this to say: backstabbing makes PvP in Dark Souls uninteresting. It's not fun to fight against; after a while it's not fun to watch; I imagine eventually it's not even fun to play. Likewise, huge numbers of people are using some of the same equipment, like the Dark Wood Grain Ring. I think doing something different is fun, even at the expense of winning.
#ShareonCommunityBlogs
Login to vote this up!