The many delicious beginnings of video games!

12:08 AM on 02.12.2012 (server time)    0
It goes without saying that the beginning of a film, book or game should set the tone and stage for what's to come. But more importantly to grab it's audience by the collar and viciously pull them in and not let go till the very last second whilst the audience remains in some sort of pleasing head lock of pure masochistic pleasure.

Awful metaphors aside I realized there have been a number of video games that have left me breathless and even more eager to play once their opening portion finished. I'm going to highlight just a small few that personally pulled me in from the get go. (Warning spoilers ahead!) 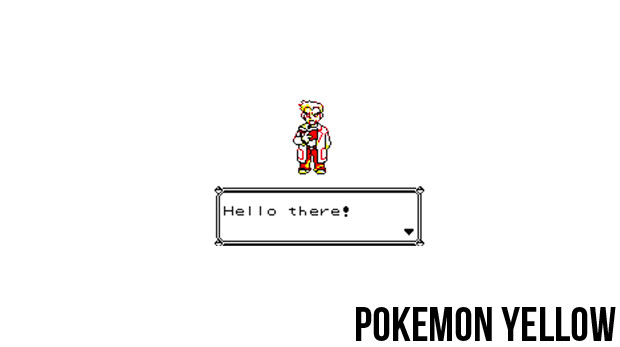 Yes I am serious. This choice is just due to pure sentimental full blown nostalgic love. I don't remember the birthday of when I got my Gameboy but I still to this day remember on Christmas morning sitting on the couch playing Pokemon Yellow with my hands glued to the machine and my eyes unable to wander off the screen.

As a 19 year old I no longer find myself getting as heavily invested into the Pokemon series but I still have strong memories of playing it as a child and look forward to Nintendo eventually, hopefully, better fucking do, putting the series on the E-Shop. As a child this was the best thing from a video game that I had encountered. Here's this weird old professor guy telling me about Pokemon and what they are whilst showing me the unforgettable cute image of Pikachu. I'll never forget naming myself within the game and then naming my rival, these are the simplest things and I love them basically due to the mass amounts of nostalgia but I don't care, I'm revelling in the love I have for this game!

So there's my short little list, there's so many other games to list and talk about we all have our personal never to be forgotten moments. Games always have something great to offer and I look forward to the next one that will take my breath away.
#ShareonCommunityBlogs
Login to vote this up!