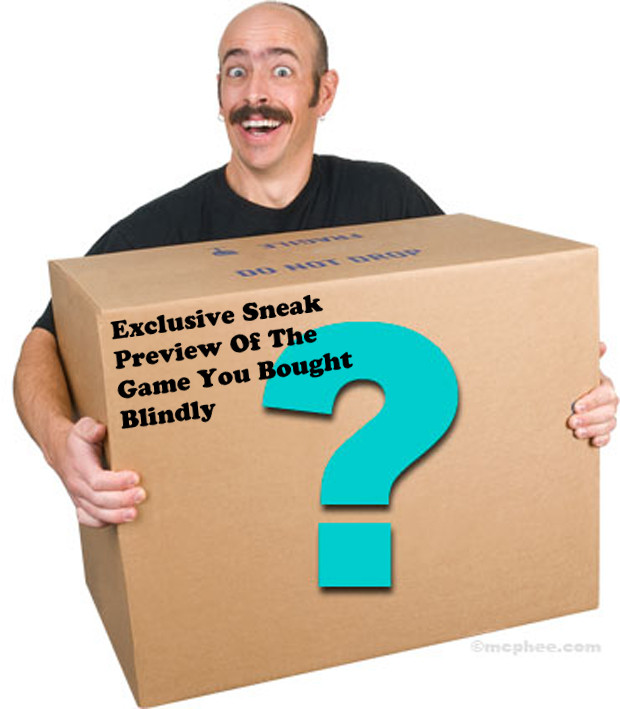 There is a significant amount of people clapping their hands at Double Fine's recent success on Kickstarter. On one hand, I appreciate the fact that the service is there to help people with truly unique ideas to get the money they need to make their dreams a reality. Here is the problem I have, though. Double Fine's ONLY truly unique idea going into this is that they found Kickstarter.

As a dude who's jumped in and funded games ranging from the mobile platforms to even board games I thought looked unique and interesting, there is one thing I typically notice. Who is ready for Kickstarter and who isn't. There are people who had their games in prototype phase for a good long time and after having had problems getting a publisher to help them out, they turn to the community. In the way of video games, these guys have a design doc, beginning art, a set schedule, and basically answer to you as if you are the publisher. In the realm of board games, these are people making all new contacts, worrying about production costs, printing games, making distribution partners, and these are people who essentially have a game ready after months, sometimes years, of rigorous design and testings.

Most of the time, these are people who have an idea, have a reason and a purpose for the money they want, and have their hands out in the fervent hope other people share their vision. I've backed projects that have succeeded and failed and the ones that failed are often people without a solid plan. The phrase "not ready for Kickstarter" is often uttered amongst the board gaming community as Kickstarter has become a great place where new and interesting projects have been coming from.

After years of running our business poorly, please fund us.

Now you have Double Fine who, despite all odds, is still around. They spent millions making a Sesame Street game, embargoed Brutal Legend reviews to make sure the truth of their game doesn't get released, and essentially had massive problems all around. They are the underdog that has made a bunch of bad decisions and to quote John Hammond, "I don't fault people for their mistakes, but I do ask that they pay for them." Double Fine has access to contacts within major publishers, they have contacts with distribution channels, they have access to industry know how that NO ONE ELSE IN THE HISTORY OF KICKSTARTER has access to.

Now, I don't mind them running a kickstarter if they had a plan, concept, even a solid direction, they have NONE of that. They have a history of business failings and their hands out for you to buy 100% purely on faith. Therein lies my problem. While other companies spent, literally, months preparing for their kickstarter presentation, Double Fine just showed up, talked their history, and said, "we promised we'll give you a game someday... super pinky swear." Don't believe me? Go to Kickstarter right now (keeping in mind, I didn't test this theory, that's how sure I am) and look at the other projects, especially in gaming. These are people with solid foundations, detailed plans, and something beyond "we're totally making a game, guys." These are people who actually have something to show long before they attempt to get you to fund it. Double Fine did none of that and this is a fundamental issue I have. They have no plan, no direction, all the contacts to get funding any other way, and now, they've set a dangerous precedent.

Now Double Fine is on the main pages, they're the top response on Kickstarter, and they've, in turn, crowded out the little guys. The dude who wanted to make his platformer but couldn't afford the software license to Maya, fuck him. Double Fine is more important. This other guy? Doesn't have contacts within publishers, doesn't have industry veterans backing him, has nothing but his dreams. FUCK HIM, DOUBLE FINE IS MORE IMPORTANT.

I know there are SOME people who went to Kickstarter and funded something other than Double Fine, but the bulk of others came, paid, got the fuck out. Schaffer used his celebrity to choke out the real unknowns, the future Notch's, and now, with that dramatic of a number, it will cast a shadow over the service. I mean, how can the dude writing an RPG system based around space pirates possibly compete with Tim Fucking Schaffer. In a way, Tim Schaffer came in and totally Activisioned everyone else on Kickstarter. Because he was so successful doing this, who do you think will pick up where they left off? I heard Jaffe's forming a new company, maybe he needs some funding. Johnathon Blow fought long and hard self funding Braid and his current project, why fight at all? Clearly Mikami should get in on that shit. The greatest thing about it is the Double Fine success means you don't have to show ANYTHING. It could be a game about a child raping clown for fuck all you know, because they didn't have to show ANYTHING beyond showing up. How ironic that, in the day where we're fighting for truly independant gaming to succeed, we allowed Tim Schaffer to big time a channel for people who truly needed the funding.

Update: Combing The Kickstarters And Who NEEDS Your Money

After giving a bit of time lapse between writing and posting the blog, I sought out some projects I feel could use the funding. Sure, they're significantly under $400K goals but THESE are the kinds of people that need your Kickstarter help.

Project 1: Saturday Morning RPG- Episodic RPGs featuring 80's awesomeness and Skeleboar...
http://www.kickstarter.com/projects/mightyjosh/saturday-morning-rpg
With an asking price of only $6000, these fellows are asking to help them finish up their project and queue some awesome iOS episodic badass into 2012. With the first episode being free, they've got a long road ahead and hope to have episodes ready to go before they start launching. The team is rapidly running out of money and presenting a truly unique concept to be brought to market, first for iOS, other platforms to follow. Check them out, watch the video, and for fucks sake, throw some support their way. After all, who else will put Rainbow Stripe Gum Zebras as a summoning spell in RPGs if these guys don't?

Project 2: Dueling Blades- Super Chibi Battling to Facebook, PS. Support these guys before Zynga just steals the game.
http://www.kickstarter.com/projects/1595463124/dueling-blades
When you think Facebook game, admit you think Zynga and their MafiaVilleTowerHarvestFuckingRipoffCloneEmpire. Don't think that way because there are SEVERAL people trying to make legitimately fun, engaging, and interesting concepts for Facebook and HourBlast Games is among them. Designed as a simultaneous action style game, you have to predict your opponents movements and be right there to deal damage. Featuring 7 character classes, campaign, customization, and even character tech trees, there's enough to do in this game even without playing against other players live. They need $8000 and what do they need it for? Advertising, software licenses, and server costs. Sure, it might be hard to justify investing in a game you never truly own, but think of it this way, they have an extremely small window to make money before Zynga releases DuelVille. So throw a few bucks their way.

Project 3: Farmageddon- A Card Game of Farming... At All Cost
http://www.kickstarter.com/projects/1892930431/farmageddon-the-frenetic-farming-game
This dude and I have some personal history. You see, as I was working on Imps Vs Puppies to print through TheGameCrafter, Grant Rodiek was always in their chat, helping folks out because he was selling this game through their POD service. Helping people like myself out to getting our cards ready to print. No money was in it for him, he was just a swell guy. He also has a history working on The Sims. When Haiku (a game design of mine) was picked up by Cambridge Games Factory, he was among the first to congratulate me. Now the problem with POD (Print On Demand) is that it's expensive since it is literally printed one copy at a time. In a perfect world, you could buy Imps Vs Puppies for $12 (instead of the $15.99 it's currently available for here https://www.thegamecrafter.com/games/imps-vs-puppies ) but because of the high cost, $15.99 is the cheapest I can go, making less than a dollar per copy. Farmageddon was in the same boat but despite this, it was doing good and one day, it disappeared, finding a publisher, 5th Street Games. Now 5th Street needs your help to print enough copies of this game to get them in everyones hands and you should really help them accomplish this goal. This was a dude who helped others at the drop of a hat and he needs your support.

There you go, three worthy Kickstarter projects that need your help. Give'em a boost, Dtoiders!
#ShareonCommunityBlogs
Login to vote this up!