4:40 PM on 02.07.2012 (server time)    0
Bandai put out a bunch of vinyl figures of Godzilla, that are the greatest Godzilla figures ever. There are many variety of Godzilla toys out there, these are of Godzilla in his many movie incarnations and of his insane villains, like the robot Godzilla and the Godzilla from space!

I've also got both the three headed Monster Zero, or King Ghidrah as I call him, some folks cal it a Monster X or Astro Monster, I call is a King Ghidrah. Mecha Kind Ghidrah shows up as well as the guy with giant knife arms, Gigan!

These toys are magical for me, I've loved Godzilla since my youth, and today I posed them with video games, because why not? 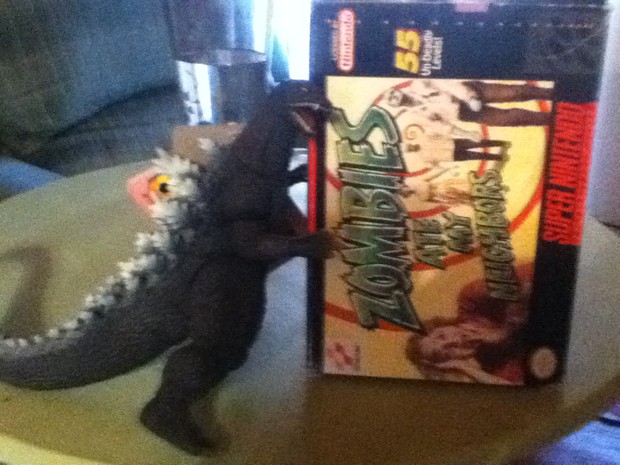 For me, this is the best looking Godzilla even if it doesn't have the charm of the old style. I love a giant menacing looking rubber suit. Throughout the course of the Millennium films, Godzilla has a few tweaks to the design, but for the most part, it stays consistant with his appearance in the first one, Godzilla 2000 as we know it, or Godzilla Millenium as the world knew it. As we all know, Zombies Ate My Neighbors is the greatest game of all time. So together at last, two great flavors that taste so good together. Yes, I've had Godzilla movies on while I've played this game, and yes, it is true, it is the best game of all time.

You guys are too.

Some of these broke and are upside down. I can't fix them right now, I'm busy finishing up Dragon Quest 8 and wanted to one up the front page with my dumb toys and video games. I'm supposed to be working on my novel in this time, this is my only night off work. I took time out of it to do this dumb thing here.
#ShareonCommunityBlogs
Login to vote this up!