9:43 PM on 02.06.2012 (server time)    0
One of Sony's mascots has finally came out with an HD release. It's available for both Physical, which includes the first three games, and digital, the digital was selling the games separately and the first one is what I started out with. With it's great colorful graphics, solid platforming, and varied gameplay it's no wonder why Sly Cooper is popular along side with Ratchet & Clank and Jak & Daxter. Sly Cooper and the Thievius Raccoonus is the first game of a series of games to come out for the Playstation 2 in 2002. It met with solid reviews and a strong following. It was later Re-Released for an HD upgrade in 2011 for the Playstation 3.

LOOK BEYOND THE HORIZON


Sly Cooper and the Thievius Raccoonus tells a story of a Raccoon who is a thief. It's an interesting story as he tries to steal back his family book, the Thievius Raccoonus, pages at a time. The story is presented in comic book like style. It's not as funny as Ratchet and Clank, it still funny at times. While the story is interesting, everything about it is just an excuse to go to one place over another. You go in and there will be a over central hub and each glowing door will lead you to a level. The levels themselves are interesting and it fits with the motif of the main villain Sly is going around. One world will lead you to a Swamp infested with ghosts and monsters. Another is what it appears to be a dog house. No two levels are the same and the amount of levels each world has is pretty impressive. 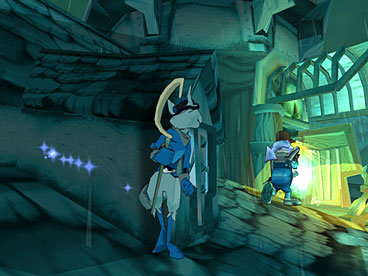 The graphics are stunning. Keeping in mind that it was released almost 10 years ago it still looks very impressive. The amount of animation Sly has is in style of the rest of the game. If he sees a blue line he can either do various things his ancestors have learn throughout the family's history. Defeat a boss and gain a new ability. The great thing about it is that when you pick a new ability the next boss is going to have mechanics that will complements what ever you learn. While going to boss to boss is liner, the way you go through level to level is not. If a level is too hard you can come back to it later saving yourself a headache.

The gameplay is fun and challenging. That is the one thing that surprised me the most about this game. It's not a very difficult game, but the way they handled death gets annoying real fast. Get hit once, die back to the the latest checkpoint, die enough times and it's back to the beginning of the level. Because the levels themselves are not particularly long, I feel that they did this just to make the game seem longer. It does not help that collecting coins does no good. Collected 100 coins will net you a horseshoe, which will allow for 2 hits before death. Collecting 200 coins will net you a gold horseshoe. A gold horseshoe will allow you to get hit 3 times before kicking the bucket. Collecting 300 horseshoes will grant you a new life. While you will constantly get coins on pretty much everything you do, there is no real incentive to go back and collect what you miss. They will just respawn after completing a level. The same can be said with the floating Sly heads. Pick one up and it will grant you another life. Throughout the game there are these letters in a bottle. If you collect them all you will unlock a new ability. You can beat the game with out these abilities. They just make the game easier to play. All the gameplay reminds me of the 16 bit Super Nintendo or Sega Geneses. Sly would feel right at home if it was a 16 bit game.

It's easy to tell who is who

Not all gameplay is good, however. The bosses are the typical 'find the pattern and finish them off' seeing how it takes one hit to kill you, it becomes more frustrating than fun. It does not help that when you do die you go back to the beginning of the fight. There is one boss battle where you have to press buttons to dodge the attacks like Parappa the Rapper. It wouldn't be so bad if it does it once, but every time you hit the boss the button minigame starts again. It's very tedious. Speaking of Minigames, there are quite a few here, but all of them are an exercise in patience. One will have you waking chickens while making sure the suicide bomber chickens, no joke, don't hit you. Another will have you picking up chests while making sure a crab don't get a single one. Doing so will end the mission. This is the only part in the game where you won't lose life. That is the only good thing I can say about it.

The Sound is pretty decent. It just has all what you would expect a platformer would have. The voice acting is solid all around. Sly sounds cocky, but not cocky enough to make him unlikable. His partners are just as good. Bentley is a great character who make sure that Sly keeps his head on straight. Murray is a pretty good character. He's the "goof" of the team. He may act like that but when there's trouble that both Bentley and Sly can't do Murray is there to help. Chasing after Sly and his team is an Interpol again named, Carmelita Fox. She chases them throughout the world. Then there are The Fiendish Five, they are the main bosses in the game and each level and sub world you go to fits their personalities. The music is pretty good, but it doesn't really have that flare that other platformers have. The sound effects are good and they do their job, but like the music nothing really sticks out all that much. It's all just standard, nothing bad about it at all. Sly Cooper himself is an interesting character, but he doesn't have that much of a personality compared to Ratchet and Clank.

I'M SORRY PARKER, BUT THAT IS NOT HOW LASERS WORK

The platforming is just that, a platform. You run, swing, jump, bounce, and jump some more. What makes this different from the other games is its "stealth". While you can stealth your way through the levels it just wants you to do the norm when its showing off it's gameplay. It's quite easy to run up to a guard who is not looking and bash them with your cane. What really makes the game challenging, besides it's odd use of death, is its lights and lasers. They are all in a pattern, and once that pattern is broken you will not survive long enough to see what had happen. The lasers and the lights are the only reason why stealth is used.

Sly Cooper and the Thievius Raccoonus is a good entry of the series created by Sucker Punch Productions. it's got solid of flawed gameplay, a simple story, solid platforming and a sense of wonder that makes the world of Sly Cooper come alive. I've always wanted to play a Sly Cooper game since I first heard about it. Now that I finally have I can rest assured that it's just as good as I hoped. I would love to play the other two because I've heard that they get better from here and the fact that Sly Cooper 4 is coming out makes me want to play it. It took longer than I wanted, but the wait was worth it. I am now a fan of Sly Cooper.
Login to vote this up!