Say hello to my little friend!!

3:26 PM on 02.06.2012 (server time)    0
I will be the first to admit that I have a little vanity in me. Not the usual physical type where I love looking at myself in the mirror (hell, I wouldn't even count myself as even remotely handsome) but more to do with what I collect.

Being a big fan of Japanese anime figures, I've collected a number of figures and model kits over the years but unlike many others, I don't simply buy completed figures from online shops to display. That kind of thing has never appealed to me. Afterall, what's the fun in collecting and showing off things if your items are exactly the same as everyone else who bought the same item? As a result, my usual poison is making garage kits, Super limited items which require me to assemble and paint them myself. The end result being a completed figure which is uniquely mine. See where the vanity comes in?

This also stretches over to video games as I have a tendency to lean towards limited edition versions of video games (or at least steel case versions) when they are available. But the nature of video game buying means that you can't really stamp your purchases as your own. Other people will buy limited edition games as well afterall, Sometimes, you can make them stand out by getting them signed by the developers. I Managed to get Kitamura to sign my Final Fantasy XIII (the only reason I haven't banished the game from my home), Hideo Kojima for metal gear solid 3 and 4 among a few other trinkets but otherwise, my collection is pretty non descript.

But for a while now, I've been getting into fighting games and, as many similar gamers will tell you, it's all about using an arcade stick! So about a year ago, I purchased a Mad Catz Super StreetFighter IV TE:S fight stick. And one of the first things I did was to contact someone on a local forum to get it modded to run on both PS3 and 360. But it didn't stop there. After a little bit of thought, I figured that I would mod my arcade stick as it's one of the few things which I could stamp as being uniquely mine. And because I'm a big fan of Blazblue, I decided to wear my allegiance on my sleeve, or rather, my stick!! 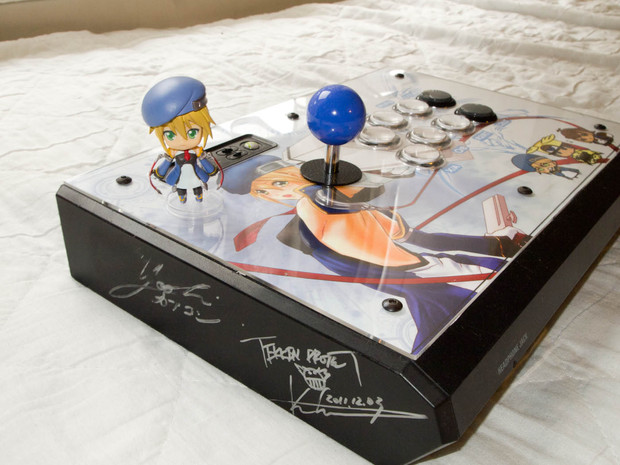 OK, it would have been even cooler if I had it signed by Mori Toshimichi and Ishiwatari Daisuke when they visited the UK last year but I got something else signed instead cos I wasn't able to take my stick to the event...

Well, that's enough about me showing off. Time to put the stick through its paces. And just in time for soul calibur V!
And for those curious, I wrote a personal blog post which went into a little more detail about the assembly process.

Can't wait for CSII:Extend!!
#ShareonCommunityBlogs
Login to vote this up!