12:07 PM on 02.03.2012 (server time)    0
Some people deserve to be punched in the face for all the right reasons. Terry Cavanagh is one of those people. He did not burn down an orphanage, nor did he disseminate hateful messages about a certain race creed or gender. No, his crime against humanity is the creation of VVVVVV, one of the most brilliantly cruel and masterfully crafted games ever to grace the platforming genre. His game is simplicity at its core, and executed in a matter that tests your patience and tenacity as much as it does your skills. 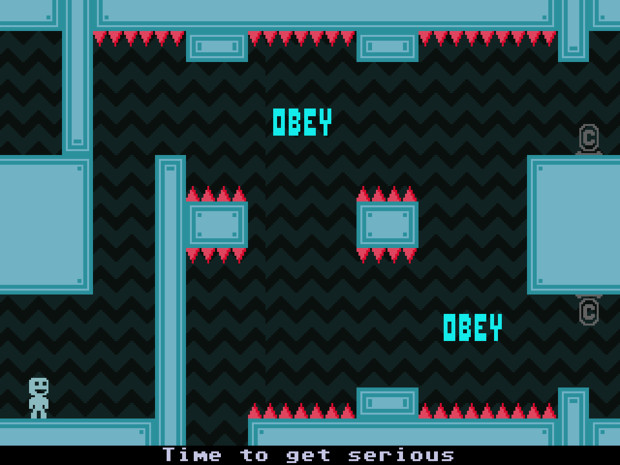 What makes this game so intriguing? What is the force that drives the player to drag him or herself through his or her own blood, sweat and tears to complete this game? Even the title looks threatening, what with each of those V’s looking like a line of spikes (And I assure you, there are plenty of those ready for you to pull your hair out over). So why subject yourself to this? Surely bragging rights are to be earned, but another reason is simply because despite it’s sadistic game design, the game is just too damn good not to slog through.

The primary focus of this game is on level design, and that is what this work excels at beyond any shadow of a doubt. Nearly every puzzle puts the definition of the word “Challenge” to its most literal sense, forcing the player to execute the precise movements necessary to complete the stage to progress further. While Canavagh’s other independent titles focus more on games as a narrative medium, VVVVVV (Pronounced “The Letter ‘V’ Six Times”, or simply “V”) is textbook expert level design. Everything is laid out in front of the player, but only though dozens of deaths will the little details come forth. While this is may seem to be a frustrating method of trial-and-error, it becomes apparent that the level design is smarter than it appears, and it has an almost arrogant quality to it. Simply put: the levels know they are smarter than you and will taunt you with failure until you can stop an analyze the situation and realize you are doing them wrong. The game is a puzzle platformer where the only game mechanic is the reversal of gravity. The player can press a button and be drawn up or down while players can control their passage between one surface to another. Simple enough right? Now add spikes, moving platforms, flying debris, bouncing wires, enemies, and a myriad of other elements to twist one’s head around and you have one hell of a mess to work through. Despite how cruel the game is, it is also equally fair. Checkpoints are scattered everywhere throughout the levels, often at the beginning and ending points of puzzles so as to not force the player to repeat puzzles already solved, and respawning itself is never tedious as you immediately come back to life at the last checkpoint. Not to say death isn’t an all-too-frequent occurrence, unlimited lives and instant respawns make the process itself simple and easy. It’s the dying itself that will drive you up the wall. In my play-through I died 1580 times. The game keeps track, possibly to tell your friends, but probably just to mock you.

The player assumes the role of Captain Viridian, a Viridian-coloured smiling chap who’s crew has been scattered all over an alternate dimension by some cataclysmic event that left his spaceship immobile until he can gather his crew to repair them. Needless to say the story isn’t the core of the game but the ultimate purpose is to explore the game-world (Commonly called “Dimension VVVVVV”) and rescue his 5 crew members (each name a colour starting with “V”- Vermillion, Violet, etc). The world is presented in a large open Metroid-esque space that the player must explore every nook and cranny to find his scattered comrades, and as well collect the 20 optional energy orbs hidden throughout the level. These objectives are secured once the player completes some of the more innovative puzzles, or location-specific special challenges (for instance running a vertical gauntlet as spikes quickly chase you- lagging for an instant often leads to failure and death).

The game presents itself in a charming retro manner, harkening back to the days of early DOS and Commodore 64 graphics. With it’s use of bright colours and ease of transition between screen to screen it’s always clear to know where sections begin and end. Backed by a brilliant chiptune score by Magnus ‘SoulEye’ Pĺlsson, the music is melodic and upbeat, evoking a 70′s futurist mood of space and exploration.

Literally my only complaint about the game is the movement controls. While still fully functional the player controls almost as if he was on ice, slipping and sliding, often leading to many, many, MANY cheap deaths and failures at inopportune times (Although whenever has death been truly opportune in this?). Again, this is a game that tests your patience just as much as your skill and keeping a cool head will always led to more success then raging at it.

This game is hard, brilliant and beautifully done. Terry Cavanagh will have a hard time topping this in his more commercial projects, and he created a new hallmark in the platforming genre alongside Super Meat Boy and I Wanna Be The Guy, especially in the “I dare you” department. I absolutely recommend this game to anyone who wants a challenge. This game is not easy. This game is not nice. This game is not your friend, and I love it for it.

Score: 9.5 out of 10
#ShareonCommunityBlogs
Login to vote this up!