In Resident Evil 2 you play as two different characters on their own story. The way the game will start is depended on which character you start out with. Do you play as the Rookie cop or a sister looking for her brother, Chris. Each has their own cutscene and pathways. In Leon's storyline you explore much of the police station as you look for a way off the city and finding survivors. In Claire's story like you explore some, plus a little more, of the police station finding clues on what happened to Chris. In both cases you will walk around the same areas. It's not often where the story line is different with one another and when it does it will include a character that Leon and Claire got. 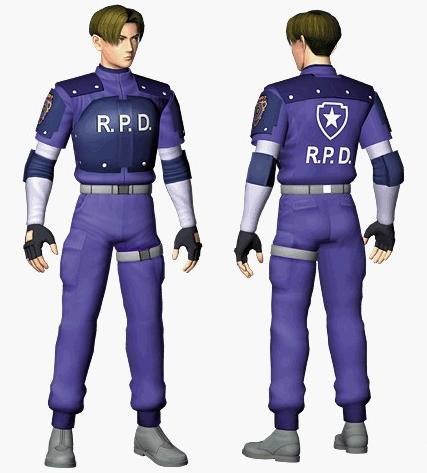 In Leon's storyline he arrives at Raccoon city ready for his first day at the force. After meeting Claire and promptly separated he heads for the Police Station. Once inside he finds that most of the doors are locked. This is where the majority of the game is set upon. You go to room to room looking for objects that will progress him farther inside the station. It could range from card keys, keys, and other objects. Moving around is pretty easy to do. It's got that classic control system going for it and while don't really run in a straight line that much, it is just as effective. If you have enough ammo it is possible to kill every zombie or monster you see. However, it's got that risk versus reward going on for it. Would you risk saving ammo so you can use it on the bigger things like Lickers and giant spiders, or will you shoot down everything you see so you can explore the areas free of anything. I choose to shoot everything in my sight. So that way I can explore the station with relative easy. And you are going to need it.

Most of the backtracking was so I can store stuff I don't need yet in Item Boxes throughout the game. Find a Rook Plug? Just put it in an item box and you can use it later. Got to a new area and it needs something you found? Just run back to the nearest Box and grab it. You use only 6 slots, 8 if you find a item pack, so use the slots wisely. I tend to keep a handgun, ammo, health, and Ink Ribbon with me at all times. So that is 4 free item boxes to put various items at. It allows you to plan strategic stuff you may or may not need. If you did manage to kill everything it should not be that big of a deal. Saving is used for strategic planning also. You get ink ribbons that you will need to save the game. One ink ribbon equals one save. Most of the time you will find two near a typewriter but sometimes, if you really look for it, you can find some more in rooms that won't have a typewriter. I saved 21 times in my Leon playthrough and still had ten left overall. 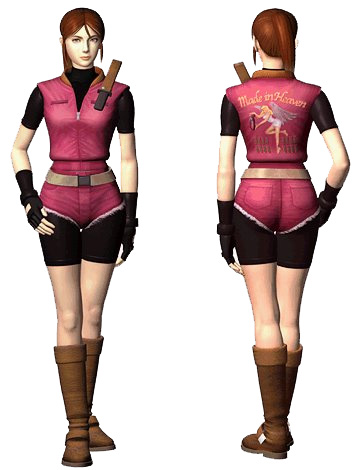 While zombies is what you will mostly see, there are some out there that is bigger and meaner. There is a Licker, a monster that will lash their tongue at you. Giant spiders. The spiders are quite harmless, but it's a giant fucking spider. Even in 1997 graphics it gave me a scare. These plant things that will spit poison at you. They are also harmless most of the time, but they are the only enemy in the game that will respawn so it's just best to run past them. Then there are the dogs. The dogs are your worst enemy. Lickers are powerful, but slow. Spiders are large, but weak. Plant Things are weak and slow. But the dogs. They are fast and powerful. There are usely two of them and they will prance at you at any opportunity. If you are trying to kill one the other one will just kill you instead. Then there are the bosses. If you don't have the right weapon and ammo type they will end you just as quickly as you blink. Some can range from pretty easy to pretty intense. It's a great feeling to finish a boss off.

NOW WE WILL ALL PAY THE PRICE

This is a survival horror game and a good one at that. I still prefer Silent Hill's way of scaring you, but Resident Evil 2 has the best jump scares. You could be in a room and after you pick up an item a Licker will bust through the two way mirror. Even if you have all this ammo it's still effective. There are a ton of jump scares in this and they are all successful on making you jump. It's not as creepy as Silent Hill, but it does the job right.

In Leon's story you meet this mysterious woman named Ada Wong. She says that she is looking for her boyfriend, John and she thinks that he could be in the Umbrella Labs near the police station. You meet her throughout the game and even get to control her a couple of times. You, along with Ada, will uncover the connection between the Raccoon Police Department and Umbrella Corporations and the dealing they had. You meet characters along the way that Claire will never meet and this is where each story is different. Both Leon and Claire has their own boss to fight at in the end.

HE BROKE THE RULES

Proving that Graphics is not everything.

Take everything I've said above and imply it to Claire. I am going to admit something, and there will be a writing about this also, I used the infinite ammo cheat on Claire. And that is because Claire's story line is pretty much the same. It's rare to go to an area that Leon did not go. In Claire's story you meet this young girl named Sherry Birkin. She says that she is looking for her mother, Annette and she thinks that she could be in the Umbrella Labs near the police station. You meet her throughout the game and even get to control her once. You, along with Sherry, will uncover the connection between the Raccoon Police Department and Umbrella Corporations and the dealing they had. You meet characters along the way that Leon will never meet and this is where each story is different. Both Leon and Claire has their own boss to fight at in the end.

Did that all sound familiar to you? It should, I copy and paste Leon's story line, but just replace anything to do with Leon and put Claire's story line instead. That is pretty much the jist of Claire's story line. The only difference is the beginning and end. You explore the same areas, fight the same monsters, and use the same items in the same areas. At first I felt bad for cheating, but as the Claire playthough went on the less and less I felt bad. The only difference between Leon and Claire is that Claire is weaker. Leon can take a few slashes from a Licker. Claire doesn't that that much. Her handgun feels weaker too. Because Leon and Claire's playthroughs are pretty much the same I finished Claire's in less time than in Leon. It took almost 6 hours for Leon. It took about 4:45 for Claire. You could argue that it was because I used a cheat, but in Leon I got lost sometimes. That really didn't happen for Claire. I'm not saying don't play Claire story line. You should because the true ending is worth it alone.


There is a reason why Resident Evil 2 is considered the best of the series. It's got fantastic jump scares, great enemies, a good story, and two different characters with each of there own stories. Resident Evil 2 proves that you can still play a game with outdated controls and still have a great time. I now have Resident Evil 3 to play.

I still get nostalgic looking at this sometimes.
Login to vote this up!